A while ago we told you the story of Maximiliano Barrientos, the chipper from Posadas who was looking to stay in France. How did your artistic dream continue? 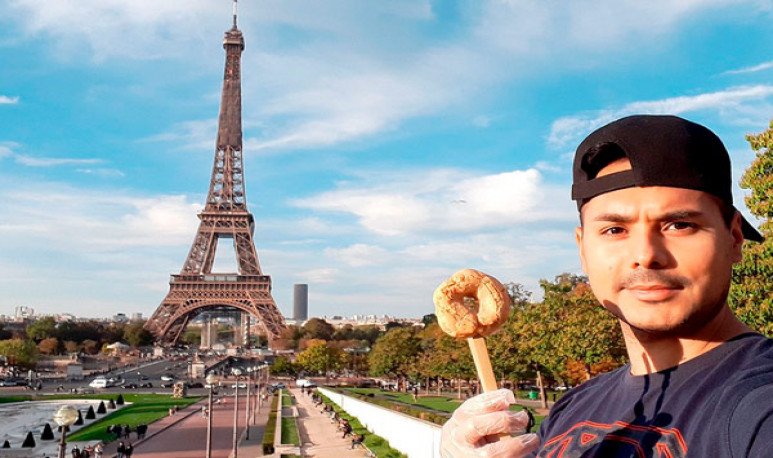 Let's refresh our memory to pick up from where we left off.  The 28-year-old arrived in  Europe  a month before the  pandemic  began to film a short film in England . But his plans were frustrated and he had to research them, to the point that he sold up to his computer to make it survive. He even got to eat from the trash before that. However, he did not lower his arms and wrote a book on his cell phone he published by Amazon. Thanks to the money obtained, he was able to head to the French capital, where he settled in the house of some friends.  With just 15 euros he decided to become a chipero and start a gastronomic microentrepreneurship that began to bear fruit .

The idea of making  chipá  arose on a rainy day as I thought how he could redouble the little silver he had. There, he recalled that during childhood he sold with his grandfather elaborations of the traditional recipe and that he could market them in Paris, the main objective was to obtain the financial resources to find migration advice before his residence permit expired. However, it came on November 5, the dreaded expiration date, and did not succeed.  So he currently remains in the city illegally .  His only alternative is to make a film to get an exceptional visa for artists . To do this, you need to raise  45,000 euros  of which you do not have.

A reality worthy of fiction

Maximiliano began selling his edible products in Facebook groups while his posts were unexpectedly viralized. Until one day he encouraged to stand in front of the Eiffel Tower to attract the attention of tourists. Little by little he gained the fame of  “El chipero de Paris” , with the consequences that entared. It happens that the chipás business is disputed with other Paraguayan traders who, according to the young man, leave him at a disadvantage. The reason is that it is a typical meal from his homeland. On the other hand, he is Argentine, although the bite is also considered native on the coast.

However, the filmmaker knows well what it is to fight against adversities and  uses his knowledge to boost entrepreneurship . He does so by uploading to social networks spots and advertising campaigns of his elaborations. He also opted to diversify and incorporated into the menu Paraguayan soup, asado, gnocchi, sweet potato and sweet bread . But it also has its risks, given that you have to go through Parisian places quite dangerous to get some ingredients. At the same time, he said he lives with the fear of being deported and he barely earns what is necessary to pay the rent.

When the story of the chippero was known, Argentine lawyer Carolina Baza contacted him and offered him help. Both met in their office and together discovered how he could stay in the country,  the solution is to film a film that can compete and win an award or conquer European film standards for obtaining a visa.   The play is called “ The Dark Side of Paris”  and comprises a kind of reality show. There, it covers topics such as drug trafficking, white trafficking and other local mafias.

Maxi knows that with her job as a chipero you will only be able to get the full amount of what you need for the project. So he decided to open a profile on the   GoFundMe  platform for people to solidarity with the cause and make donations. Finally, he said that the film is going to be done yes or yes because it has no alternative. Safe and hopeful, he explained that with his current legal situation no one will be able to hire him, nor fulfill his dream.  It's not going to stop until Warner Bros approves their film about the Falkland veterans .