We tell you the story of a Cordoba artist who painted one of the largest murals in São Paulo. He is Cordoba and tells us about his Brazilian adventures. 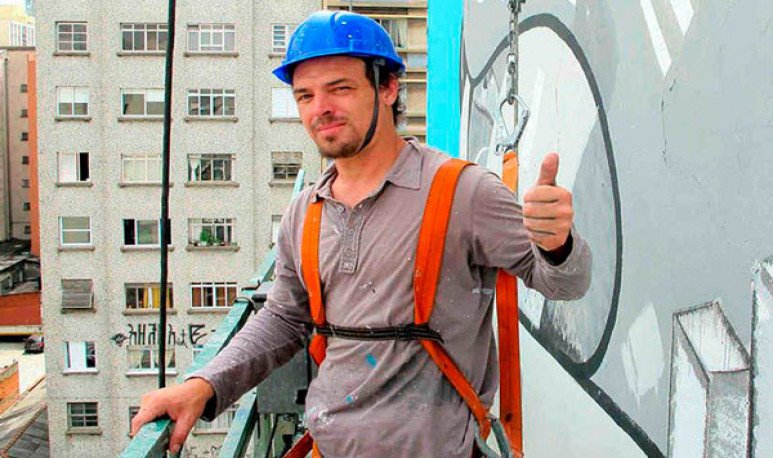 “ O mais grande do mundo”      is a phrase that emerged from marketing  and became popular as a headline phrase of the  selvagem portunhol spoken by Argentines and Spanish speakers. In this case, we use it to invite you to know  the story of Tec, a Brazilian artist (mix of Brazilian and Cordobese ) who painted one of the largest murals in the city of São Paulo.

This Cordoba painter does not use or divulge his identity, prefers to be recognized with his stage name, which he chose to spread his work.  He is 45 years old and has lived in São Paulo, Brazil, six years ago.  Throughout his stay he was doing  different jobs and interventions in the city.  Some more recognized, others less famous. However, they all retain  an original and captivating style.  Tec is part of various art exhibitions and is noted in  every street in the city of São Paulo.   His paintings convey  deep concepts and transform  city dynamics.  Tec defines himself in his networks as  “multidisciplinary artist who uses asphalt as a support for his works” . This definition fits perfectly into the spatial layout of the Brazilian city.  If asphalt is your canvas, in São Paulo the possibilities of creating multiply at every step.

The beginning of the journey

His work is constantly renewed and, in adverse contexts such as the current one, is  being part of digital samples.  After building a trajectory based on  perseverance, effort and perseverance , Tec achieved his recognition. This creator comes from a  Cordoba family in Barrio Jardín   that went into exile with the beginning    of one of the longest and most bloody dictatorships in history. With the survival instinct, the artist's family left the country in '76.  Barcelona, Paris, Israel, are just a few of the countries that the united family travelled before they could return to their homeland. They were only able to return to democracy. But that was not a sign of stability or stillness. From the house of one of the grandmothers, to a new house  and another and to another,  turning around the neighborhoods of Cordoba. Until the stretch went  from La Docta to Buenos Aires: Olivos and Vicente López  were the places where Tec lived the last stretch of his adolescence.

Adolescence that was crossed by stencils, aerosol, art and rock.  Little by little, he was finding his way. A friend of Tec's was a plastic artist gave him a book about  the birth of graffiti in the 70's.  The book came from New York and  from there it brought the strength to reinvent the lives of these two kids.  At the age of 18, they were the first to paint graffiti with rounded letters  and shadows in Buenos Aires , using the  typical hip hop language.  Tec later perfected his technique at the age of 20, when he went to  Barcelona to live 6 months  and breathe graffiti culture.

Between 2000 and 2005 he lived in different spaces and worked  with many colleagues .  The cradle of his creativity and art was the UBA, with his incipient career in Graphic Design . So he met many of the companions with whom he would carry out different projects.  Until he arrived in Brazil, where he worked in an Art Gallery  and gradually began to appear in  the move.  At one of the events in the place, he met his current companion and mother of his two daughters.About the city he chose to live and start a family, he says: “It is a very ugly city, but it counteracts it with a special soul. His cultural move is impressive. He doesn't sleep. You get a guide and you have a thousand music choices, shows, artists. ”

So Tec challenged himself and an entire society.  He decided to make the biggest mural in the city. He shared with the media some of his experiences and motives:  “In San Pablo you don't paint graffiti  like in Buenos Aires . There's a lot of surveillance. I was really looking forward to it. Then I thought something big. I finished it in 2015, after three years preproducing it. I had to open a public limited company and rent the wall of the building. It's 68 meters high. That's 18 floors. In addition, I did it independently, as an investment. In Argentina there is a lot of movement in Under and Bohemia, but in Brazil they paint hired by companies. They don't have that stuff. And in fact, everything that was done on a large scale is funded by some brand.”

Tec  did not join  the art industry that validates the  defense of private property  and does not allow graffiti art.  “ I preferred to send myself alone. It's important to me that it doesn't look like advertising. I took the opportunity to criticize the urban planning of the city, which is a disaster. When I painted it here, the bike paths were being implemented and the people of São Paulo were complaining. I played with the idea of blindness. And it ended up being  an iconic mural.  It's in a central place. You see it by cars on the highway, but also, on weekends, when the highway closes to become pedestrian, you see it up close. And that's great.”  Thus, he managed to go further with his work, proposing  new perspectives to see, live and inhabit the city of São Paulo.

The last proposal in which this Brazilian artist is participating is Tango 360,  an exhibition that is transmitted from a shed in Barra Funda neighborhood  and is virtual.     Shall we go see her?

An artist who beautifies her city by painting murals

And, you, how were you doing in these games?

My neighbor the murderer