Home People Argentines around the world Telling stories with recipes

We tell you the story of Francisco, an Argentinean who went out into the world and found his place in a refugee camp in Athens. 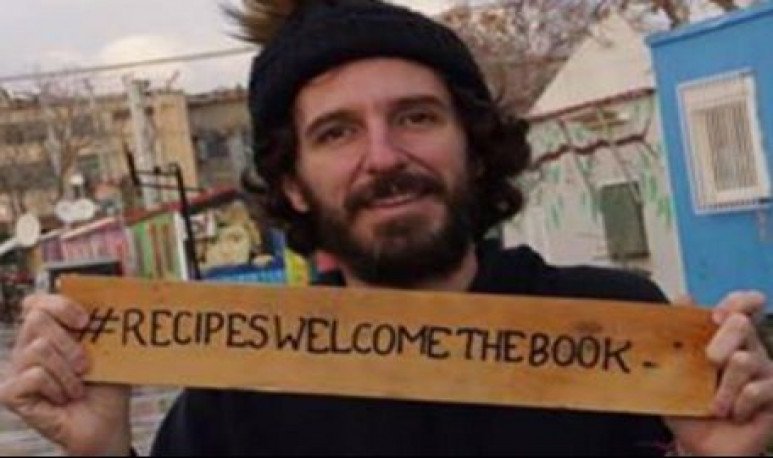 Our place in the world may not turn out to be what we would have expected. Something like that happened to Francisco Gentico, a 38-year-old Argentine photographer and business manager who, until 2012, worked at  YPF . One day he left everything, put together his  backpack  and went into the adventure of traveling. That's how he arrived at the Eleonas refugee camp in Athens, Greece, where more than 1700 people from 25 different cultures live.
There he met the Elea Project (@Projectelea), a volunteer association that collaborates in this state refugee camp. Today he is the coordinator with two Englishmen and a Cypriot. So he came up with a different idea: to make a cookbook with stories and recipes from 36 refugees from 14 different countries. The target? : show that behind every refugee there is a life story and that migration is not a  threat , but a significant contribution to a country's culture.
Recipes welcome. For now it was published in English and, from March, will also be available in Spanish. The collection of the book will be allocated to the purchase of school supplies for children who study in the Eleonas field.

The drama of refugees in the world

The term refugees is somewhat contradictory. Shelter means shelter, receive, care and protect. However, the thousands of people who are forced every day (because they do, have no alternative) to leave their place of origin without any support or preparation do not find shelter very easily. The reasons for  exile  are several, but most have to do with wars, political or religious persecutions. Entire families are launched into the sea in precarious vessels, with few or no resources, without food, without shelter. They leave with what is on and without exact direction. Needless to say that no one leaves their home tremendously for pleasure, because he wants to “try his luck.” Those who flee as we tell really don't find another way to do it. It is an instinct for survival, coupled with the lack of attention and solution on the part of international bodies that fail to safeguard the most unprotected.

What ends up happening in many cases is that boats are drifting, with all the dangers and risks that this entails. Many lose their lives in trying to escape their country and seeking help. That is why NGOs are essential. Thanks to these organizations, refugees end up finding the camps ready to help and shelter them. Volunteers are also the main link in the humanitarian aid chain. Without the hundreds and hundreds of people willing to give their time and knowledge to the service of others, nothing we said would be possible. It takes a lot of love, social, human conscience and courage. Because the borders and international waters from which refugees are rescued are not paradise. On the contrary, they are often dangerous areas and volunteers risk their own lives for a single reward: helping.

An anecdote that returns hope

Of course, most of the situations that Francisco Gentico has to experience are difficult. However, in the midst of drama and risks, life always pushes to continue and win to death. A clear sign of such a statement was experienced by the volunteer when in the middle of a rescue operation, over the sea. He met a woman who was pregnant and childbirth was triggered at the time of the rescue. Luckily for everyone, there were no major complications and the baby survived with his mother. They were taken care of by Francis and his companions, everything went very well. It's those stories that give back hope.