Home People Argentines around the world Passion at a distance

While Nicolás, a young man from Gaiman, Chubut, toured Europe, there were two moments that moved his shelf from Argentina. 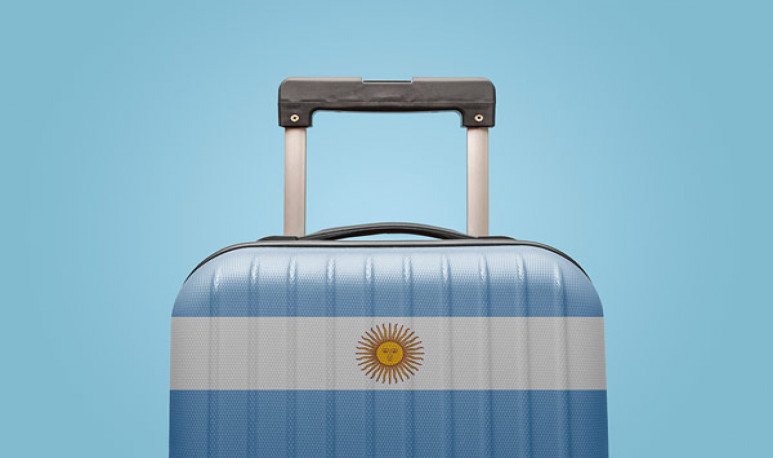 Nicolás Calvo is 34 years old, is a native of   Gaiman ,  Chubut   . From November 2019 he started a journey that took him exploring different parts of Europe: Spain, France, Andorra and Belgium. The last time he was installed in the Gallic country and there, after the impediment by restrictions due to the coronavirus pandemic, which did not allow him to continue touring the world, he decided to return to his place of origin.

However,  his stay in the old continent of the  Chubutense , left pearls linked to sports . Nico is a fan of  Boca Juniors , but he is also a fan of Gaiman Fútbol Club , the village's institution. His love came to such a point that he has the shield of the “Rojinegro” on his skin for a few years.

In dialogue with Ser Argentino, Nicolás celebrated the achievements of the “ Xeneize ”. “I come very sweet, celebrating a lot trying to close the wound in Madrid,” he said with laughter and did not escape the historic final against the classic rival. “I say it proudly.”

But you notice it excited when you hear him talk about the football love of the boy payment.   On December 8, 2019 it will be recorded in the memory of all supporters of the Gaiman Fútbol Club, who managed to return to the Olympic return that day after years of drought.

In context, in mid-year, the “Gaiman Fóbal” had reached the final against Germinal de  Rawson , one of the most important teams in the region ; n. There, things didn't go well at all. The team from the capital   Chubutense   won with hierarchy by a double 5 to 2, both on the way and on the return.

However, within a few months, the same rivals saw each other again. On December 1, 2019, Gaiman Fútbol Club, as home won 2 to 1, a totally different picture from what had happened in the previous final, so he arrived with intact hope for the return match. 7 days later the result was repeated but the winner was Germinal, and everything was left thrown into the lottery of the  penalties .

“My love is the Gaiman Football Club, that day I cried like a baby. Nobody understood anything in Andorra: it was one of the happiest days of my life.” In the penalties, the “Rojinegro” did not fail, while the whole of Rawson did it twice, and at the decisive moment, Mariano “Chuky” Fernández brought to glory to the gaimense ensemble, to the joy of the whole people, of Nico and so many others who in the distance, for the benefits of the internet , listened to the game and could get excited as if they had been on the rostrum.  “ I remember the penalties, the goal, it was a unique moment, I get goosebumps,” he says notoriously nostalgic and happy.

In addition, he stressed that the title was achieved against what he considered to be “the best rival by history and by team. I'm very proud of our players, to die with all, learned from the other final. I went to the semi, which I honestly thought was what we could,” adding, “I was full missing the final, imagine with this.”

However, he left a thorn of having been on the other side of the Atlantic: “It was sad not to celebrate with everyone, but they made me feel heat, passion, emotion for the nets,” and added: “It's something I'm never going to forget. I wear it on my skin, I have a tattoo on the shield, I worked for the Board of Directors, the truth is something that fills me with pride, I gave t-shirts to my friends here. Ending the year with that championship was something I never imagined nor will I forget in my life, and I sent a hug to the red readers of Ser Argentino.”

While in France, Nico witnessed another historical event and lived the death of      Diego Armando Maradona   in the style European.

“I always had mixed feelings, like many with  Diego , but I was very moved. He shocked me, I was in a bubble I couldn't accept it, and with the days went on I became sad, I fell some tears.”

On how it affected those lands, Nicolas said that “everyone talked about Maradona. You say that you are Argentine and you relate it to  Maradona, is the most famous Argentine , in all European cities it was amazing.

During his stay on the Côte d'Azur, the Gaimense said that there were many Englishmen there, “and when they found out they came to embrace me, not knowing if I was a football player, they know what it means.” He also commented that “they don't feel the rivalry they wanted to know things about Diego.”

“I made some Chilean friends who afflicted asked me. It was a world event, sad and we're going to remember it in the best way because it became a legend,” concluded Nico.

And so it was, as in the distance, the Chubutense can live the joy of a historical event for his locality, and he fired, in his own way, the best player of all time.