Home People Argentines around the world Nomad Family: more than a trip, a way of living

Part one: From Andrea's testimony, Mom Nomad, we present to you the story of this particular family. 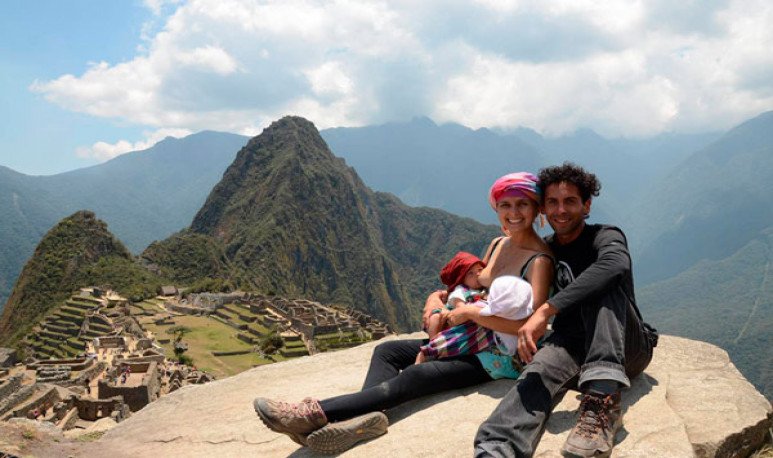 The first trip of the Nomad Family  began drastically . Jeremiah and Andrea were in a couple a few years ago and had had bad luck with some business. After having a construction company and failing,  Jeremiah decided to change course and proposed Andrea to leave for Ecuador.  The proposal took her by surprise and accepted on the condition of marrying before leaving. “I thought he was going to tell me no, but the next day we planned it and at a time we were already on our Renault 12,” says Mom Nomad.

How was the process until the day they traveled?

We started searching the internet and we discovered  the amazing world of travelers.  Right away we got that tickle of wanting to travel, the thought of “ if they can, we too”.  At that time we were in a  process of detachment of the material, because we had money and we couldn't use it.  Even today we maintain the idea that, if we have money, it will be to realize what gives us happiness: travel.

We always had the traveling spirit. In Neuquén, when we could, we escaped to the Cordillera, but we never left the country. Once the decision was made, we put together a rolling house and, as soon as  we started traveling, we realized that this was the way we wanted for our lives . It's not just a trip,  it's our way of living . The first stage was from Argentina to Ecuador. One detail: I was 5 months pregnant.

At what point did they stop traveling by car and mobile home?

Renault 12  was our nest, our shelter to stop anywhere . The girls came to Ecuador with a year and a half years old and it was an advantage to have a car and a house. But, continuing with this work of detachment from the material, we began to see that the car was no longer entering our future . Hence the trip begins to mutate (at first it was called “From Argentina to the world in R12”); as we  change the way we travel, emerges Familia Nomade , the brand we have today

If someone is just starting the trip and has the possibility of having a car, we recommend doing so. But, for the number of years we've been traveling, it wasn't good for us anymore.  We decided to travel with the backpack, by plane, by bus.

What is it like to raise your daughters traveling?

Lorien and Osiris were born on a trip,  their normal is to be constantly traveling . They started the trip from the belly. What costs them most is to stay still (now with a pandemic above all). But raising children travelers is amazing.  They are super sociable, they grow up seeing different things, interacting with different cultures, learning at our par.  Besides, we killed ourselves with laughter, because a lot of things we learned at school they're living at the age of six! Animals, villages, cultures, their breeding is super cute. For us  it is a very beautiful way to bring people into the world, we are all day with them,  do homeschooling with us. We chose it once and a thousand times.

When I asked Andrea what was her most difficult time and which was the most pleasant, she answers that both refer at the same moment: the birth of their daughters.

They were both  born in Rosario and were premature . Despite its excellent health,  low weight is an indication for the activation of protocols in hospitals. You're not allowed to get babies out of the hospital.  There were a lot of things we didn't agree with, for example, we're vegans and in the hospital they wanted to give them formula milk, having me in place. So  the worst time for me, joins with the best moment,  which was the best time of my life, in general.

Seing them born was the best. But, at the same time, having to be in a month with them, with everything that entails.  We don't agree on many things with the health system.  We're a number, we're not mothers having children. It was really hard.

We also had a memory and a huge precedent, we made a lot of trouble . Thanks to this, today in the Argentine health system the  mother kangaroo technique is implemented. The baby's skin is constantly in contact with the mother's skin and taking her breast to grow faster and regulate its temperature;  we were the first family to use it in that hospital and today it is the most employed.  We generate precedent and jurisprudence, which makes memory something to think that things can be changed and that everyone can think about it.