Germán Carrizo, a Mendoza cook of his own resaturant Fierro, in Valencia, is on the run for a famous Michelin star. Read his story. 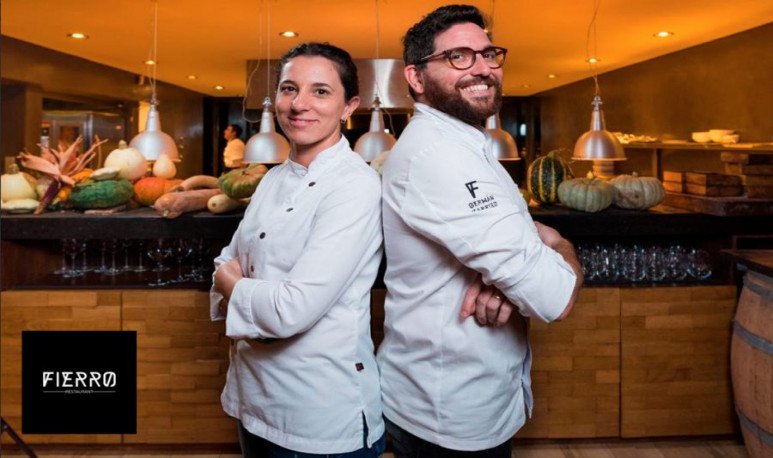 A Michelin star mendocino cook? Can it be? Yes.

Germán Carrizo and Carito Lourenço are a  couple  of chefs who left  Mendoza  13 years ago. After getting two “Michelin Stars” for Quique Dacosta's restaurant, they could get yours for their own subtracted. Fierro is located in Valencia (Spain). And I'd be the first in the world from a single table to get it. Thus, Germán would be the first Mendoza to get the highest gastronomic award.

Fierro  became the “Argentinian gastronomic embassy in Valencia”. So they were inviting important Argentine chefs to cook there. One of them was Lucas Bustos. That returned kindness and in Espacio Trapiche recreated that long table arranged for 12 diners.

Germán spoke with EcoVinos about the concept of Fierro

-We're cooking for seasons. We handled a lot with seasonal product. And we try to vary the menu a little, which are five snacks, six starters, two main ones, and three desserts. That is paired with six glasses of wine, and sometimes with other drinks as well. And it really is a particular but quite exciting concept. Diners don't know what they're going to eat, nor what they're going to drink, or who's going to sit next to them.

How was the way to get there and position yourself in Valencia?

We were going to Europe 13 years ago. We work in two restaurants. We went to Menorca. When we came back we agreed to go to work with Quique Dacosta who at that time were two  stars . Then with Quique we opened a restaurant called Vuelve Carolina, and El Poblet, which gets the third star.

- What does it mean for you to cook again in Mendoza?

I'm really excited because it's been hard to cook from  Mendoza again. Professionally we find ourselves at a very nice time and to cook again to Mendoza and find a mendocino product is brutal. We are surprised with the product here and be able to cook our kitchen. Which is entirely Fierro's identity with Argentine product. It has brought us back to what we were: Mendoza proud to cook at home.

- And where did you cook in Mendoza?

I cook here some time the Hyatt, and then in Las Negras in Silvana Cavagnaro. Perhaps what motivated me most (to travel) was that Spain in 2006 had incredible gastronomy. I was at a time of tremendous boiling, and we honestly went to find something else. I went only for six months and I've been 13 years. The goal was to try to find myself gastronomically. And to be able to cook with everything I learned there and with the products from here. So this is totally good.

Carito, also in dialogue with EcoVinos said about Fierro

Fierro is a restaurant that Germán and I set up four years ago. It's special, different. A table where 12 guests share it and the kitchen is integrated into the living room. We receive people in what we call the living room of our house. We're a six-person team cooking for 12.

We open Thursday, Friday, and Saturday noon and night. At noon we have two menus and in the evening we have a single tasting menu. Everyone shares. We are very aware of the diners and we make everything available to them. That day Fierro is his house.

- And in addition to Fierro, they put together a real gastronomic organization?

-We started a gastronomic advice project called Gastronomic Tandem. But as we need to cook for ourselves was born Fierro. And we combine it with the consultancy. Today we have 23 people in the staff that is the kitchen team. We also have a pastry shop called La Central de Desserts. And another restaurant called Dona Petrona. We continue to work with a lot of passion, how we do everything. And wanting to do more things this year, which is very interesting.