Home People Argentines around the world Manifesto of a Cordovan traveller

We share the words of a Candelaria Panadero: a Cordovan who travels. Alone or accompanied, never stays with the desire. 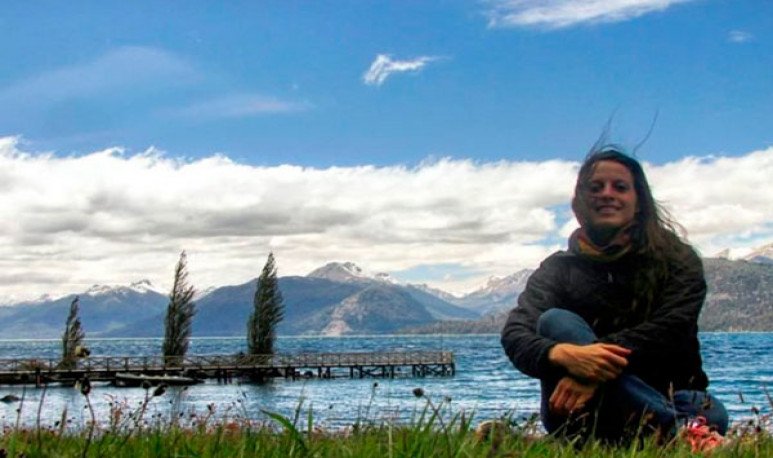 Candelaria Panadero shares her vision of the world, life and travel, being a woman in a small manifesto.

Yes, I'm a woman and I travel.  That is my mental response to the comment that falls from your eyes. Stunned comment, as if an alien had landed in the yard of his house. An exorbitant look, unable to reconcile verb and noun.

I travel. As a couple, with friends, alone, but the important thing is that I travel. And I repeat it as often as necessary: ladies and gentlemen  , this is also for women.

Despite the bad omen for women,  discovering the world as a woman is amazing.  Hands extend at every step. Like that time in Cuba: the train had announced its arrival in Santiago from Santa Clara. Susana, my company during the eighteen hours of travel, along with her son-in-law, Fran, invited me to their little house on the outskirts of the city.

In that home the little ones in the family were waiting for me: Zuleimys and Alexa. “Zule” moved his belongings to the armchair while pointing out that his bed was going to be mine during those days. In response to my refusal to steal his place,  he replied smilingly  as he cleaned the bunk bed by a metre and a half:  “For the visit, the best.”

We're limitless.   No matter how you travel, the world awaits us.  He's ready to teach us and to learn from us. Like Angel, a Santanderian worker.

Hours were running on a Colombian morning.  Together with Vale, my sister, we improvised a breakfast  under the only gas station in miles. The night before, that same place had officiated as a hostel. We put together all the petates and go on the route, in search of a passage that will take us to Bucaramanga, the capital of the department of Santander. In a few minutes, the first car stopped before Vale's thumb. Angel and his two sons were heading to San Gil,  passing through our destiny.

— What are two Argentine women doing next to the route?  “ asked the eldest of the three.

“ Knowing the beautiful Colombia through its people. And what better way than asking for rides — we answered.

“ Oh, you are like “the madman's song,” he said , and proceeded to recite it:

And there are crazy people who, being crazy, live life better.”

The journey continued with laughter and obviously anecdotes of crazy things.   When we arrive at destination we say goodbye to our roadmates, f happy and grateful.  Angel smiled:

“ I was injected with life. Thank you,” he said , and they disappeared behind a corner.

Stones on the road

Not everything is roses before you go on a trip.   One is not impervious to the mid-morning news of the radio show. Will I be able to? What if I'm out of money? And the language?   Questions and fears  would take up several sheets if I started to write them, but I prefer to write the things that do happen.

It was March and I was in Poland, on the S7 motorway. “Gdansk,” my sign was praying. Stop at the exit of the Polish capital, I was waiting for my driver. While accommodating the backpacks on the side of the route, a Renault Laguna stopped a few meters away. As I approached , the language barrier complicated the presentation.  He pointed to me the sign and said “me” (“me”), then I proceeded to settle in the passenger's seat.

During the journey to northern Poland, the gentleman of about fifty and so many years did not give up to engage in a conversation. Faced with the idiomatic obstacle, I began to feel  some discomfort at his question about whether he was traveling alone.  My head was starting to shoot a Hollywood film when my failed interlocutor interrupted me: we were about to stop at a gas station. My face must have denoted the panic of my imagination. We got out of the car.

I think my heart stopped for a moment. While he was pointing to the bathroom, he hung the car keys on my neck. By sign, I understood minutes later, he wanted to tell me to trust him, that he wasn't going to leave without me, to go quiet in the bathroom. When I left, there he was along with two hot coffees, perfect for the cold that morning. He asked me if he was hungry;  falsely I said no  and, like a grandmother, with a naughty look, she brought her hand hidden in her back.

“For you,” he explained, and gave me a can of peanuts and a portion of cake. My stomach thanked him very much.

We arrived in Gandsk and deposited me at the bus terminal. After a smile, we took some selfies in front of the Blue Lagoon. He fired me with a kiss on his forehead and disappeared down the avenue.

I'm going to be honest. In this article, you were going to read an extensive disclaimer . “Complaints” about how different a situation can be according to the point of view — gender — with which you travel. Warnings and statements regarding the decision to know the world.

I wondered what for. I better write with joy, how I travel.  If you're a woman and want to travel, cheer up.   The world is there, waiting for you. And, if you cross one already on the way, slap him on the back and avoid amarillist comments like  “watch out, the world is dangerous”, “do not travel alone” or “a woman in that place? Impossible.”  I must report that on the way around my house, unfortunately, things happen too and I do not stop going to buy bread on the corner.  I'm not even going to stop doing it.