Home People Argentines around the world Leave everything for citizenship

Having a European citizenship is, in many cases, an essential advantage when travelling. This is the story of a couple who left everything to get it... 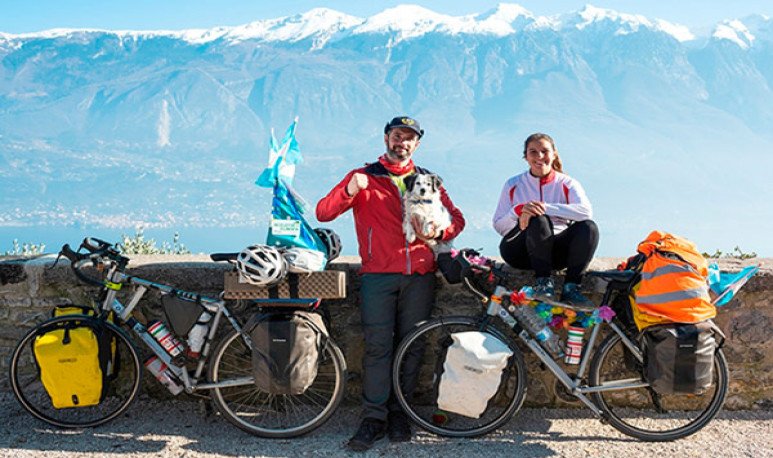 This is  Leonardo Santi and Carla Vales, two Cordovan who play for everything.  Despite the pandemic, they have been touring Italy, for more than a year and a half,  on their bike and with their dog companion.   Thus, they plan to return to their homeland , but only after having traveled  many countries of the world.

Young people  are 32 years old, a common origin and destiny.  Both are Cordoba's pure sepa, he was born in La Playosa and she was in Villa Maria. These  globetrotters of restless souls were born in the breasts of  two middle-class families . In which  to reach Europe was a myth.  Neither of them had citizenship, nor did they have money,  but travel life usually has its unexpected turns...

Beginning of the Endless Story

The beginning of the love story was given  at the University of Villa Maria,  where each decided to study  Food Engineering.  There they met and began a life of  adventures and planning . Leo described himself as a “passionate” about motorcycles and was the one who had  the idea of making the first two-wheeled trip . The pilot trip was  a honeymoon on two motorcycles , covering parts of  Argentina, Bolivia, Peru and Chile.   “ To tell you the truth, that was our first trip. Now we're still on two wheels, but no engine. It is more environmentally friendly, economical and our fuel is food. We are happy to have chosen this way of traveling,” says Carla  from Val di Non, in the Trentino region of Italy.

Latin America didn't reach them, they wanted to cross the puddle. Live an adventure in the faraway.  They had already seen that they could last hours and hours traveling on two wheels.  They assumed that, on the other side of the puddle, it would be the same.  Europe was consolidating itself  as a new destination ...

More than a formality

Today, from Italy, they say:  “We came with few plans and little money and  the priority was to get citizenship.  We didn't have time to think about what we were going to do next, although we imagined working on anything to raise money and at some point leave in a van.”  But the return  is growing more and more.  Young people got citizenship and work. Thus, they were equipped to be able to  travel the Italian country on  two wheels  and on pedal.

In addition,  they have a faithful company: “La Piri” is a dog who accompanies them, from Cordoba, in all their projects.  On each pedal, Leo drags  the fruit cart fixed on his bike,  on which he takes the Piri  . Every 40 minutes they stop  so that she can stretch her legs, do her needs  and play with her tennis ball .  “ It has a mattress to travel pleasantly and a roof that protects it from the sun and rain.  He likes to stand and watch,  especially if a cat passes by to bark at him”

In 20 months, Carla and Leo pedaled more than 13,000 kilometers and traveled 60% of Italy.  In the course of the trip they lived unforgettable moments, good and bad. They crossed small towns with imposing landscapes,  large cities with  extravagant dynamics and were able to capture with their postal eyes the sea and the mountains.

“ What we like most are people.   Their reaction when they see us  passing by with the Argentine flags is impressive. We are forced to stop at every step,  everyone wants to greet you, know which part you are from, what we are doing here  and above all tell you that they have a grandfather, uncle, cousin, neighbor or acquaintance who once went to Argentina to look for a new opportunity,” says Carla.

Until before the pandemic , Carla and Leo financed their trip by selling postcards.  But the drop in tourism meant  that they had to find another income.  They got jobs as  apple pickers in Trentino,  an area known as the “Italian Alps”. A tourist landmark, with unimaginable panoramas. On their Instagram account (  @happyhours_biketravel ),  they post photos of their journey and their lives in Italy.