Accompanied by their Caribbean dog, the Rioja couple claims that they are not tourists because they live the city, stop, and walk it for a while. 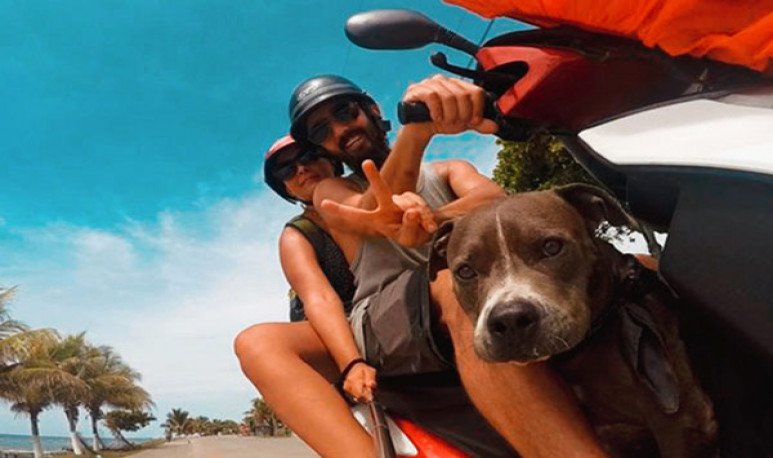 A  Rioja  couple has been around the world for more than six years. In the course of their journey, they met a stray dog that they automatically adopted to be part of their adventures. Since then, Junior knows different countries along with their owners.

Luis Medina and Laura de la Fuente have been a couple for over 16 years. They decided to turn their routine lives around and set out on a motorhome “La Tota por América”, a Volkswagen Vanagon model 86 that allowed them to travel different countries accompanied by Junior, his Caribbean dog. The couple toured Panama, Costa Rica, much of Mexico, the United States, among other countries.

At first they planned to move to Panama, where they have relatives, but “nomadic hippes” came later, Laura said. When they arrived in Brazil, they came up with the idea of staying there and selling collises, but then they decided to continue traveling. The fact that they don't stay in each place for long, apparently, is because of the experience of being screwed into the routine that made them fly to wherever the wind takes them.

When the decision was already made, Luis and Laura began a savings process. They began to change their  habits , for example, they stopped going out to eat, going to the movies, and they realized how much money they wasted on outings when they started to make accounts.Instead they invited friends to eat at home and, of course, spent much less.

Luis left first, looked for a place in the  Caribbean , while Laura stayed to sell the furniture, clothes, and everything she could sell to take that money and follow Luis. “I decided to stay alone with two things: a peruvian alpaca quilt and a yembé Uruguayan,” he said. In this way, he entered a new life stripped of the material. “Everything that was crafts, ornaments, crockery, blankets, everything I sold,” he added.

Of course it took time, for seven months the Rioja couple was separated and the fights started on Skype. During that time, Luis was settled in Costa Rica working in a lodge, a simple wooden accommodation surrounded by  nature . It is there that they decided to settle for a while, and when Laura came to that place, she quickly adapted. “It is a small place, in Puerto Viejo, a super hippie, bohemian town with an Afro Caribbean community. It was very different from the rest of the country. It was a very unique place with respect to the jungle and marine fauna. Very special. These Central American countries, such as Panama, Nicaragua and Costa Rica, are smaller than La Rioja. So we made a base there in Costa Rica and we never stopped moving. We stayed for three years,” Laura said.

Since they were there for a long time, they traveled 14,000 km through Europe. “Germany, France, Belgium, Holland, Czech Republic, Poland, then we crossed to Croatia, Italy and Spain, from where we took a flight to discover the Sahara Desert in Morocco. Then we went back to Costa Rica. That was a pilot test. Save money to make that trip and with that lifestyle. Then when we returned we bought our motorhome, which we baptized  La Tota for America .”

Laura clarifies that the idea of touring so many places is not traveling as a  tourist  and Europe was an exception as they were working at the time.They bet on living the city, standing up, and walking around it for a while.

During his stay in Costa Rica, in the first three years he managed to finish his thesis in the middle of the jungle accompanied by his dog, which was where he found him.Then Junior accompanied all the destinations the couple visited. The new member of this adventure traveled by bus, motorcycle, car and plane. The Rioja couple, on their social networks have thousands of followers, as they share each place they visit.

In the U.S. USA, Luis and Laura worked to fix the Tota and continued to travel Mexico, after being stranded for several months in Playa del Carmen due to lack of spare parts. Then they met Yucatan, Chiapas, Oaxaca and Guadalajara. Then they entered the United States again. to continue touring, this time the West Coast. California, Arizona, Oregon and Washington.

Also these two cute madmen were in   San Pedro Sula, the second most dangerous city in  Honduras  with the highest homicide rate in the world. “Well, nothing never happened to us. Where do they come to steal from us? In the United States, in  Atlanta . We'd ride in a friend's van and park 15 minutes to go to a pizza place. They took my backpack with all the technology: gopro, compu, etc. After that our friend's family organized a fundraising campaign and the crazy thing is that we were able to collect the money to buy everything again,” Laura said.

It's about time Luis said something, isn't it? “The Riojans in general travel to Chilecito, Catamarca and eventually go on holiday to Carlos Paz and stop telling. And having been in the number of countries we've been, and in which we'll be, makes me proud, and I can have broken that. Traveling gave me hope, humanity, solidarity. It doesn't matter the country, the language, that repeats itself. I found a lot of people who think differently. A lot of people struggling to make things change. In collaborating with nature, in being self-sustainable,” he said.

Finally, if we start thinking, not everything is rosy. The Rioja couple missed many family moments, such as the birth of their nephews, the cedron to put the mate as the Riojanos used to, the last goodbye to their grandparents, etc., but all decisions have their consequences, and that's life.

Without a doubt Laura and Luis complement each other, he likes adventure, beaches, mountains, nature and she is more inclined to cultural, museums, art provided by every destination she visits.

When you have two moms

Renata Schussheim: in a state of art

Half life dedicated to self-cultivation of cannabis

The art of helping bring life