Valentín Saal is a Mendocino business manager working in China. Via Instagram he told us the experience of getting alone into a different culture. 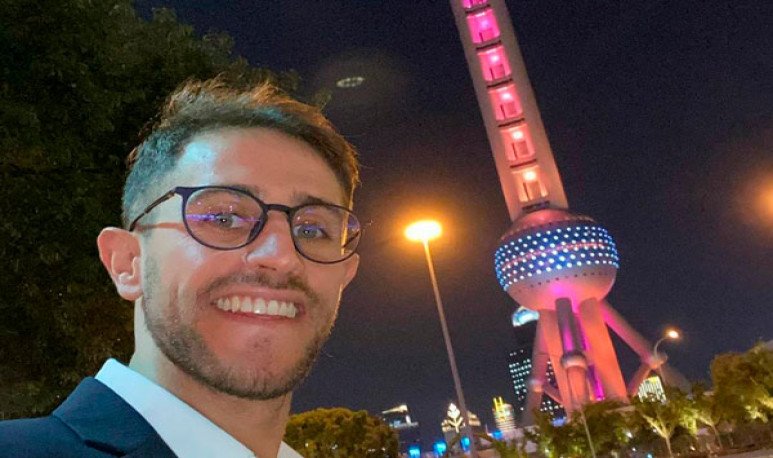 She's 26 years old, but she's been living in China for two.  First in Beijing and then in Shanghai . “I'm in China 2 and a half years ago.  I lived in Beijing for a year and a half, while studying Chinese Mandarin at Tsinghua University (listed as the number 1 in China). Then I moved to Shanghai for a job opportunity. I've been here for over 1 year .” Before this adventure, Valentín Saal graduated from  UNCuyo  with the title of Business Administrator. “ I work for a Spanish wine company in what is business development ”. Definitely, such a busy life with a full agenda makes him forget about the “loneliness” factor since he took initiative entirely alone.

Any of us would begin to list the differences between Eastern and Western. However, Valentin looks at it from another perspective: “ I wonder to think more about the similarities than the cultural differences I encounter here with Argentina. The same thing happened to me in South Korea (the country that aroused my fascination with Asia). At that time I realized that we all value immensely the same: family, friends, work, happiness. We like to spend time with loved ones, get together to eat or drink something,”  says Mendoza, in relation to feelings evidently inherent in the human race. But it does highlight some differences: “Clearly there is a difference in terms of tastes:  while in Argentina our mouth is made water to think of a   roast , in Korea they are water their mouths by bbq koreana. The ways of living cultures may be different, but the bases, I feel they are the same, in China and Argentina.”

As for the language, Valentín confesses that “ after having arrived in South Korea in 2016 without speaking a word of Korean, and seeing myself walking the streets of Seoul as comfortable as if I were in Argentina, he took away (if at any point I had it) the fear of the unknown.  I arrived in Beijing without talking anything about Chinese, I studied and today I speak an intermediate mandarin that allows me to live here. Communicate with local people and work in this language.” However, “Shanghai is a very international city, where you could live without speaking Chinese. But, without a doubt, I think that a much richer experience is made when one can communicate and understand the local culture.”

Would you go back to Mendoza?

“Not at the moment.  I'm learning a lot where I am and for now I focus more on the here and now than on future plans. Until the next adventure appears ,” says Valentín, who definitely has everything clear.

“ I start the day with a few   MATTES  ALWAYS”, so write the word, in capital letters. “Weekdays are a lot of work, gym, yoga, and some socialization with friends at night.  I have friends from all over, many Chinese and many from Japan, Russia, Korea, Germany, England, USA, etc.  On weekends I like to explore Shanghai, alone or with friends, or take some mountain getaway or some Chinese city I don't know.”

Finally, asked about what is the strangest thing about Mendoza, highlights one of our emblem products. “A good  loin  with chimichurri. (And to my family and friends, of course)”