Martín Echegaray Davies launched an expedition in 2017 to unite the three Americas. 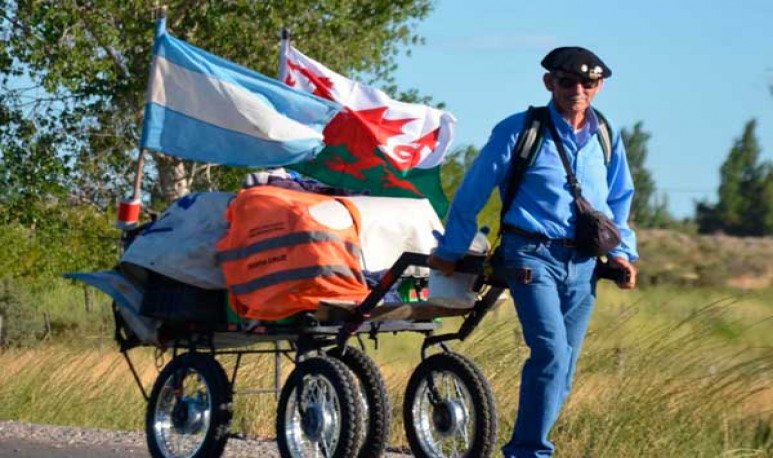 Martín Esteban Echegaray Davies was born in Trelew,  Chubut  , and decided almost three years ago to start a walk to unite the three Americas,  from  Ushuaia ,  Tierra del Fuego , to Tok, Alaska.

While the trip had to be suspended due to the closure of borders, there was little accomplished by the walker, who from Fargo, North Dakota, in the United States, decided to end his journey and  return to the country on 26 August .

Echegaray Davies was born “in a farm where my mother had no medical assistance or midwives, ironically my grandmother was a midwife” in 1957. Descendant of the  Welsh settlers  who arrived aboard the sailboat “Mimosa” to the shores of what is now known as  Puerto Madryn  in 1865 , Martín began walking along with other members of the Welsh community between the aforementioned city and Rawson, the provincial capital.

Later in time, he was encouraged to replicate the expedition of Luis Jorge Fontana and los Rifleros.A voyage that joined the sea and the mountain range started in October 1885 and culminated a month later in which some thirty people, most of them members of the Welsh community installed in Patagonia, took to know the Chubutense territory.

However, that did not leave him according to Martin and decided that it was time to meet other destinations, so he decided to unite the south and the north of the continent on foot, carrying his “carricatre pilchero” to carry what is necessary during his journey.He began refurbishing his escort all this time in June 2017 and  on October 23 of that year he departed from Trelew to Ushuaia .

The original idea was to travel (after visiting the 23 provincial capitals of Argentina) the capitals of South America and “crossing a very special jungle,” says the adventurer in his blog. However, as that expedition would take him too many years, he decided, after visiting all the provinces of our country, to continue his journey through Bolivia, Peru, Ecuador and Colombia, without going through the jungle.

To get to Panama, an issue he had not resolved when he left Trelew, traveled by water, as an admirer took him from Cartagena (Colombia) to that country on a sailing yacht.This is how he continued his journey, whose log can be read on his blog or you can also see the videos of his journey on his YouTube channel . After arriving in Panama, he continued through Costa Rica, Nicaragua, Honduras, El Salvador, Guatemala and Mexico. In November 2019, he entered the United States.

Martin arrived in early March in Pembina, North Dakota, 4 kilometers from the Canadian border, where, contrary to what he had been told, he was informed that the visa to enter Canada had to do it before he got there. People in Fargo, where he was living these months, tried to help him so he could achieve his task, but the advance of the coronavirus complicated things, the borders were closed and he could not continue his journey.

Finally, on August 17,  Martín decided to report that he returns to Argentina , because “the borders are still closed and the time to travel in Alaska is already beginning to be cold.” However, beyond not fulfilling his maximum goal of reaching Tok, Echegaray Davies, who began his journey, united the three Americas.Accompanied by his carricatre pilchero, with the support of those who followed his journey and the solidarity of the people in each of the points he visited, Martín Esteban Echegaray Davies walked the continent from Ushuaia to North Dakota. A real globetrotter.