Home People Argentines around the world From Rosario to Mars 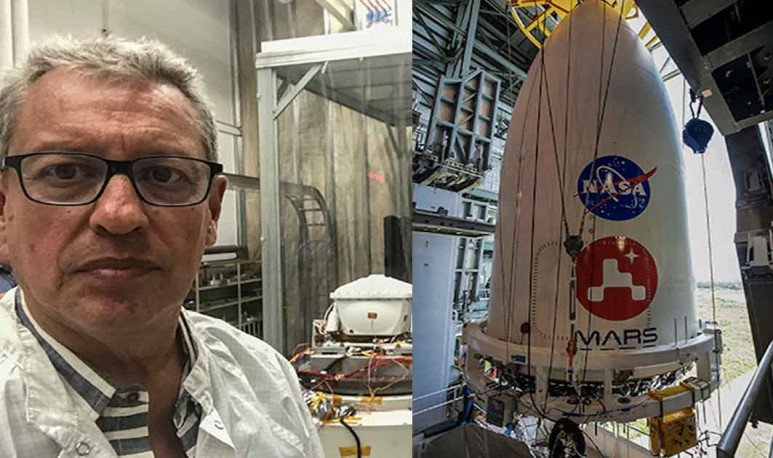 Raúl Romero lived his  childhood  in Arroyito. Perhaps, in those years, he dreamed of  flying on a spaceship to Mars. As children   ,   we had that dream.Raul did it .  Or at least he shares that longing is getting closer and closer.

Last July 30, the launch of Perseverance Mars Rover from Cape Canaveral, USA was world news. It is a vehicle manufactured by the Reaction Propulsion Laboratory that is  part of the Mars 2020 space mission  of the NASA Mars Exploration Program. The ship will control seven scientific instruments to study the Martian surface starting from the Jezero crater. It will carry 23 cameras and two microphones on board. In the mission you will also sail a helicopter scout, which will help the rover Perseverance find possible places to study.

The scientist from Rosarino  Raúl Romero will find the scientific instruments that will take NASA to Mars  in the mission. A robot will traverse Martian soil for laser analysis and function as if it had geologists on board. The main mission of the team controlled by Raúl Romero will be to search for the existence of water and traces of some form of microscopic life.

In these missions, always, what is sought is water. He will land in a crater where his supposed to have passed a river. There they will analyze if there are chemical components that allow us to know if the water existed. And, if there was water, there might also have been other organisms or kind of life. And what everyone wants to know: the built-in instruments for making oxygen will seek to create the conditions so that, in the future, perhaps in ten years or more, astronauts can be sent to the red planet.

How does an Argentine get to NASA?

Raúl Romero is 63 years old and, as we told you, lived his first years in the province of Santa Fe. There, the same day he was  12 years old, he learned that his parents had decided to move to the United States . Also in Santa Fe he watched on television how man first stepped on the  Moon . It ran on July 20, '69 and Raúl wanted to be a lawyer. Today he is a mechanical and aeronautical engineer. For 30 years he has worked in the Jet Propulsion Laboratory (JPL) of the National Aeronautics and Space Administration. Bah, work at NASA!

Raul barely remembers his passing through the primary schools Santiago del Estero and Florentino Ameghino, both in Rosario. And the truth is, he's already struggling to speak fluent Spanish. But from  time to time he returns to the country, to give motivational lectures  for students.

Raul, today, is really important. The professionals, led by Romero, monitor the 23 cameras installed in the vehicle. One of the major deployments planned by NASA will be the launch of the helicopter that will “come out of the tummy” of the rover. By its function, it will be similar to a drone, but, in this case, it was specially designed to withstand and traverse the Martian atmosphere. You will be able to observe and tour the places where you will then travel the Perseverance. From the arm of the rover, the instruments will come out that will allow analyzing the rocks and dust of Mars and it will even be possible to collect samples to bring to earth.

The date chosen to send the rover to Mars coincides with the time when the Earth is closest to the red planet (occurs every two years). Therefore, the trip will be shorter and will require less  fuel . However, it will take about seven months to arrive at your destination. That is to say that it will land in February 2021.

A nurse in the Quom community

When La Gloria arrived in Cordoba