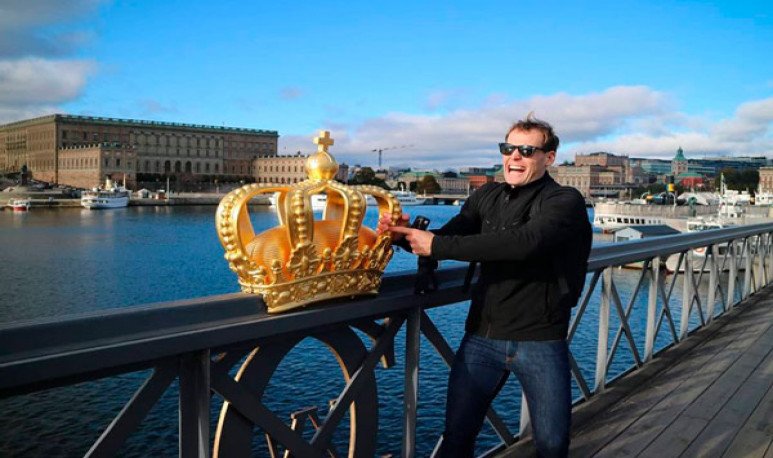 Fede remembers the times in Santa Fe, researching online to see  what chances he had to go abroad.  When he came to the United Kingdom, he didn't hesitate. He worked doing everything, in the land of the Beatles.Years passed and today he shows his life on his website www.elmundosecunfede.com, his youtube channel and on the main networks.  Today Fede is in Jonkoping, Sweden.  But we tell you what his European journey was like.

Since those adventurous beginnings in England, Fede spent every summer in Spain. He says he was  missing the heat of his native Santa Fe. Looks like a lie.  We Santafesinos don't stop complaining about our climate . But, after spending raw winters in Europe, the body itself asks to return to something that resembles its roots.

The reality is that in that part of Spain there are often many job opportunities for physical education teachers who want to play as bathtubs. First responders, they tell them there. So Fede didn't just work very well in the Spanish summers. Also,  in Ibiza, he met his current girlfriend, who is Swedish.

He had achieved some stability in England. But the philosophy that accompanies Fede before each trip is that, with each of these experiences,  “never lose anything. You always have everything to win.”

So, when they made the decision as a couple to go live together in Sweden, there was a whole new “ start again .” He was looking for some fixed job as a physical education teacher, which is his profession.Like his girlfriend, he was working at a hotel in Ibiza, but he kept his “base” in England. “So it was a couple of weeks to close the stage in the UK and  start back in Scandinavia.”

In the land of vikings

“The start was not easy, because I came thanks to a job in a ski center. The language and the cold were very complicated.”

While Fede already  brought the experience of going through a large adaptation process like going to live in England , “here we had to start from scratch in several respects. Incorporate another way to relate. The good thing is that the Swede cares a lot about the other. Because of the environment and, lately, they have opened the doors a lot to people from other countries, especially refugees.”

In Fede's life, the trite idea of leaving the comfort zone is totally real. Little by little, this Santafesino is starting in the world of “his thing”. He's been studying Swedish for a long time. “Like everywhere,  you do better if you get involved as much as possible with the idiosyncrasy of the place .”

With his life as a couple and after so much traveling, Fede today is comfortable and looking for stability works in Sweden. But he always wants to keep traveling and sharing experiences in the world.  Today, he interviews other people like him who are in different places on the planet . Everyone tells what that place he is like. “It's just that I like to motivate the one who wants to emigrate. It's not because I think you have to leave Argentina, but because traveling and knowing the world I think it is key to everyone's development. I take a personal look at what places in the world are, what kind of jobs can be found and things like that.”

The world according to Fede  was born with that idea: helping people who, like him six years ago, have no idea where to start an adventure. Today, many Argentines share their stories through Fede's spaces.