Home People Argentines around the world Crack of knives

Diego is crack making knives. He made one with parts of the symbol of Santa Fe and today he is in the United States, integrating a reality show. 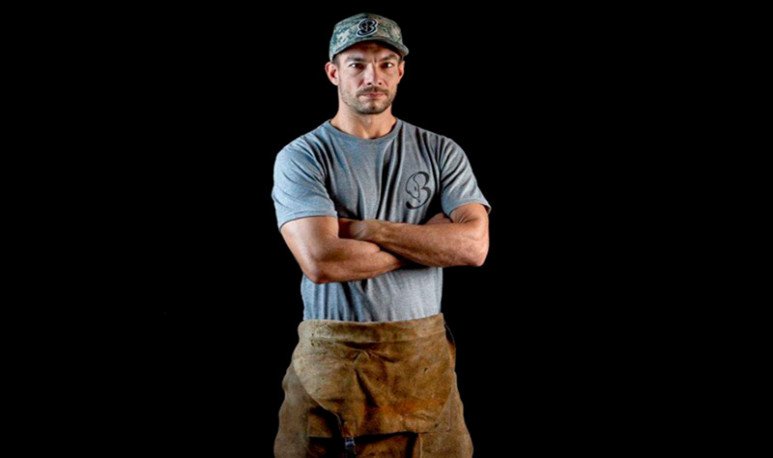 Diego Borsotti is a 35-year-old Santa Fe lifeguard  . But, some time ago,  he was fully engaged in something else...

Almost two decades ago, walking along the beach the days before the reconstruction of the Suspension Bridge that collapsed in 1983, Borsotti found two original pieces of the structure flagship road of the santafesinos. It was a steel bolt and a fragment of red quebracho . After many years of treasure these parts and at the same time his knowledge and passion for knives grew, Diego understood that  it was time to make a knife that represented Santa Fe  and a central part of his history.

After more than 45 days of intense work in his workshop located in Barrio Sur, and after going through a thorough process of research into the materials, possible combinations and elaboration, Diego forged the knife. It was impressive, this  to do it with original pieces of the Santafesino emblem . It was not only a steel bolt and part of the “floor” of the bridge, but also a fragment of quebracho colorado, with everything that tree means for this region of the country. Thus, the work “Santa Fe Knife” (Santa Fe Knife, is how he put his masterpiece) is a sample finished with the exceptional ability of Borsotti. Diego  gave life to a work of art that carries inside part of Santa Fe's living history . More than 90 years after its inauguration, two pieces joined together to bring a knife to life through the hands of a Santa Fe artist.

The road in the cutlery led Diego really far. As well as  to integrate a select group of knife forgers  who competed in a hit American television reality show .

With the knife between your teeth

Eight competitors from Brazil, Mexico, Colombia and Argentina participated in the Latin version of reality “Forged in Fire”.  In the event, different white weapons representative of all parts of the world and history were subjected to complex challenges in which they had to set up, trial and under pressure. Whoever wins the competition, which will be issued once a week, will win a prize of $10,000 and the title of the best forger in Latin America.

The program is broadcast on History Channel and has already been eight uninterrupted seasons. With the participation of Michel Brown as driver and Doug Marcaida as part of the jury,  throughout the third season for Latin America they evaluated the weapons that the smiths presented to them . Among them, Santafesino Diego Borsotti, for his knife.

Diego  had already manufactured more than 500  knives, but this international challenge catapulted him to other experiences, knowledge and knowledge.

The Santafesino knife manufacturer  was selected in a casting that took place in 2019 nationwide, where each participant had to  draw a knife, showing the process in a video and answering specific questions. After being selected, he traveled to Mexico with his tools and with all the expenses paid in February of this year, where the television program was recorded, in the Mexican area of Ajusco, more than three thousand meters high.

Borsotti did not manage to forge the best edged sword , but, in the final, he put the art of national blacksmith among the best on the continent. What Diego obtained is not less.  Reality, without a doubt, will bring a wide range of possibilities for its future, for having a massive arrival throughout Latin America. The Santafesino artisan stayed with that satisfaction and knowing that he achieved a dream based on work, effort and study.