This is the story of a professional born in the land of fernet and quartet, who brought all her energy to the African continent to embark on a revolution. Trained in the agricultural field, he created his own company and lives his life between Africa and Argentina. 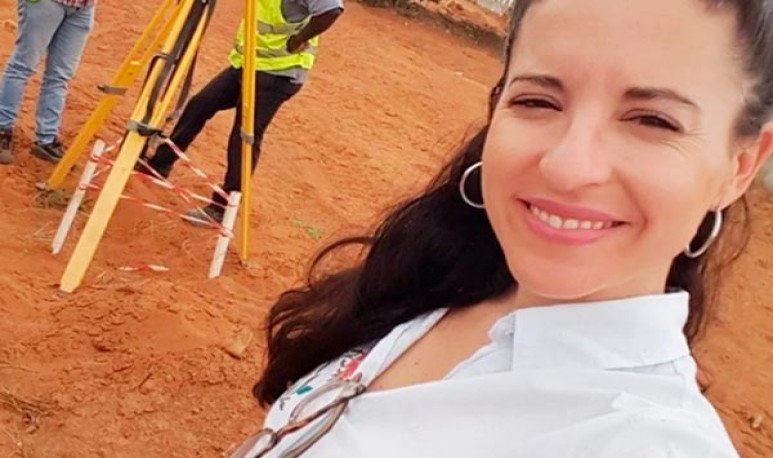 Giselle Llanes is a native of Almafuerte, Córdoba  and has worked for 7 years in relation to Africa and its agricultural developments. At only 34 years old  he founded his own company  named after Hectare Uno H1+.   She is an agronomist graduated from the National University of Córdoba  and chose  to plot her professional t rayectoria throughout the world  . He founded his project that spreads the Argentine production model, reaching every corner.  Her life force and experience lead her to position herself as a  high-ranking professional . And their contribution to the community becomes a breakthrough. This is his story...

Giselle began working with Africa  while pursuing her undergraduate career.  She was  in a Cordovan company that  provided  development services for the industry.  At the moment, he was dedicated to operating with everything related to machines that add value: flour mills, soy extruder plants, dry pasta processing, biscuits, snacks among others. She, while working,  identified new opportunities . She always did it  looking at the field  and the origination of raw materials which, for her, was  the biggest deficit she found on the market . So one day, he decided  to bet on his own project.  He created H1+ and began to offer  agricultural solutions on the other side of the pond and on a completely different continent.

The tasks of Hectarea One

What the company does is  provide technical and commercial advisory services to the field for each producer.   In addition, they have an e-commerce platform in which they  connect medium and large local farmers or even foreign investors.    With a broad and forward-looking vision  ,  investments are also generated as a whole,  all related to  the agricultural world.

This project  was born in Africa, because Giselle identified that this area has a  spectacular market for the production of grains and meats.   But above all, because  progress is too gradual and the agricultural area needs a greater impetus.   Thus, the engineer and her team  focus on scale production and  replicating successful models such as those developed in Argentina.

Around the world, looking for tools

The life of Giselle Llanes runs between planes, studies,  business and interculturality :

“ I always stop-over in Argentina, and  reunion with our suppliers of technology, supplies, agricultural machinery, etc.    With them we talked about the  new commercial strategies to be  implemented in our systems of  production in Africa  ”.

The company's base is in Angola, where Giselle currently lives ,  although they are now also  planning to open a branch in Zambia . However, she says that she and her colleagues  are constantly returning to Argentina.  Not only because of labor issues, but also because everyone has his family, and because sometimes to  miss mate is inevitable.

He says that, with his Argentine team, they try  to be in Africa within 3-5 months  and then return for a while.  Their homeland calls them back  frequently. Despite the success of his company, and that  Africa is the continent that is  watching it grow and Angola his new residence, he says that “   it is quite heavy to be all the a& ntilde; or complete by customs, the way of life”.

In addition, he details that in the international industry,  “when it comes to food  Argentina never disentones, since it is one  of the relevant characteristics by which we are known on the planet.”  This helps to position your company in the market and  enables them to constantly create new projects  . Giselle Llanes  is an Argentine pride for her  insight, wisdom and strength as an international woman, professional and agro entrepreneur.

Adolfo Cambiaso, the man who scored a before and after at the Argentine polo

Marcos Milinkovic, the Argentine captain everyone wants to have in their team

The first superclassic affected by COVID-19 went to Boca, but only in penalties

Horacio Pagani: “In football first is emotion, then justice”

“The girl that cleans”: a Cordovan production in Mexico

Euthanasia in Argentina: the story of a wrestling doctor