Germán Gomez participated in research in Germany and was part of a prestigious team from the United States and Russia. Apparently, the young man was born to collaborate in the world of science. 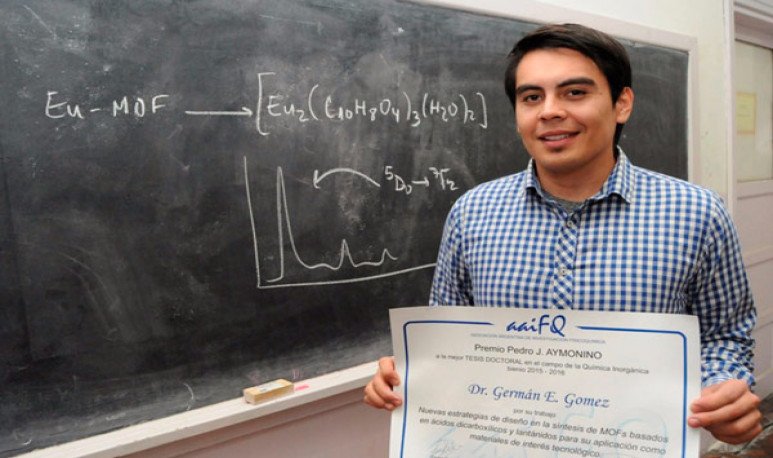 Germán Gómez is a professor at the National University of San Luis (UNSL) and assistant researcher at the  Conicet  Research Institutein Chemical Technology (Intequi). On May 31 he began research at the Karlsruhe Institute of Technology (KIT), in Germany, through a scholarship awarded to him in December 2018. It should be noted that the young man was the only one selected in  San Luis  to join this prestigious Institute abroad and thus contribute his knowledge to the world of science.

In this sense,  Gomez  referred to how the possibility of being part of the  research  on the development of devices based on inorganic materials nanostructured. “This academic mobility arose from a call in 2018 between the Ministry of Education, Culture, Science and Technology and the German Academic Exchange Service (DAAD). Taking this opportunity, I have a communication with Dr. Christof Wöll, director of the prestigious Karlsruhe Institute of Technology (KIT), Germany, to address a project closely related to my activities as an assistant researcher at the National University of St. Louis”, explained the young man.

It should be noted that these materials are in constant expansion referred to material science due to their implications in various fields ranging from catalysis, sensing, drug release to their industrial escalation as adsorbents.

In addition, the young native of San Luis explained what the  project was about. “It consists in the development of devices based on nanostructured inorganic materials. These platforms could be used as sensors of important molecules in the field of inorganic and analytical chemistry and materials science. Basically these materials I speak of consist of nets made up of metal ions that are joined by organic ligands that in the literature are known as MOF. The idea of this project is to promote the growth of MOF on a very small scale, so as to obtain thin films supported on metal substrates. Obtaining these films would make it easier to manipulate them to be used for different purposes,” explained the teacher.

He later commented that the group of Functional Interfaces is led by Dr. Christof Wöll, who pioneered the way to synthesize MOF from a more  technological  application. “It is really motivating to be able to access cutting-edge characterization and implementation techniques such as those offered by the KIT, with the aim of addressing the proposed project,” he said.

In turn, the work he carried out focused on topics related to the project of the scientific research career of the National Council for Scientific and Technical Research (CONICET), under the direction of Dr. Griselda Narda (UNSL-INTEQUI) and Galo Soler-Illia (UNSAM-INS).

“The project aims to design multifunctional platforms based on MOF for degradation and sensing of polyaromatic pollutants of environmental interest. In this sense, the obtaining of thin films plays a fundamental role for a controlled arrangement of the material and being able to regulate the structural characteristics and therefore the properties sought,” Gomez added. He also argued that “the fact that a chemist can regulate how atoms are arranged in a network to obtain a desired property or response makes the work challenging, fun and innovative,” the young man said in an enthusiastic tone.

Finally, when the San Luis press had asked him about the expectations of this project, the young researcher said there are several. “From the academic point of view, I am very motivated to learn new methodologies to understand and apply these nanosystems towards the point-in-time development of sensors. The acquisition of this knowledge would open the doors to various studies that we can carry out in our University,” he said.

“Personally, I believe that learning and training through this type of mobility is of vital importance for any teacher or researcher as it allows to see what are the perspectives in science, and also be able to make collaborative ties to face future projects. The building of research networks is the essential means for a group to grow,” he added.

And, as if that were not enough,  Germán Gomez  joined a team that researched materials derived from the nuclear industry and, together with colleagues from institutes in the United States and Russia, managed to discover that materials and applications can be obtained from derivatives from the nuclear industry. It should be emphasized that the work was chosen to illustrate the cover of the prestigious magazine  Inorganic Chemistry . Without a doubt, the young teacher and researcher from San Luis, thanks to his commitment and dedication, leaves traces in the world of science.