The entrepreneurship “The Asado Experience” is a success. Even, the Salteño had Barack Obama as a guest. 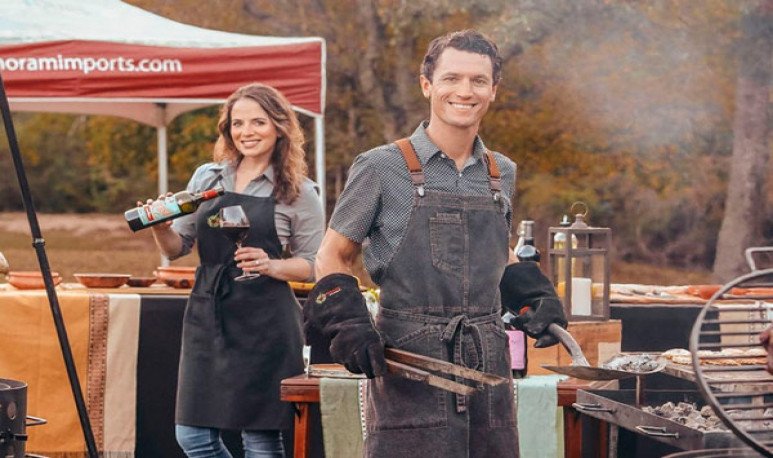 The Argentine asado reached the palates of the Americans thanks to the venture of a salteño. This is “ The Asado Experience ”, a project by Mariano Cebrián who, with his business, managed to conquer and impose the  typical food  of Argentina in events taking place in that country, with outstanding figures.

Cebrián  left  Salta  in early 2000 to continue his dream: playing tennis abroad. Club Gimnasia y Tiro de Salta organized trips where Salta participated. He traveled to Bolivia, Miami and other places in the United States. At just 12 years old, he competed with important figures of the sport's atmosphere, such as Pico Monaco, Carlitos Berlocq and Brian Dabul.

In 2003, he decided to study Psychology and then planned to pursue a master's degree in business, so he settled in the vicinity of Georgia College & State University in the city of Milledgeville. Regarding his experience, Cebrian argued that those years were of intense activity, study and tennis every day. In turn, the academic atmosphere led him to meet many people and enjoy different cultures.

During the summer, he taught tennis to boys and adults in East Hampton, New York, and the money raised was earmarked for his studies and personal expenses. Then, Angelina, who is currently the wife of Cebrián, came into his life. First they got boyfriends, shared dinners and desserts together, and then when the couple took hold, they decided to live together and move to Chattanooga, Tennessee, where Angelina had gotten a marketing job.

After several years, back in 2011, Salteño entered a  wine  import business that led him to work with three wineries , one from Salta and two from Mendoza. Then came a new project that led to marriage. In the framework of meetings between friends and family where they enjoyed roasts made by him, one of them asked the couple to cook for a birthday and from there was the idea of setting up a boutique catering company dedicated to events with a detail that distinguished him from the rest: family roast.

In this sense, Cebrián explained to the national press that each item on the  grid  is staggered every 10 minutes, and what stands out most about the service it provides is that it is personalized and the slow down, where this style was something new for Americans, which tries to try a bit of everything and not fill up very quickly.

Accustomed to cooking roast for college colleagues and also for friends and family, doing it in a professional way was a great challenge for him, in addition to playing in implementing a new way of eating through the typical dish of all Argentines such as asado, generated a boom of sensations for Cebrián.

Regarding this, he commented on the differences that exist between the cuisine of the Americans and that of the Argentines, and argued that the typical barbecues there are based on cooking everything in a single moment, the table is organized buffet style where everyone is served what they want, and they consume it on a standstill. But the food is cooled, and the remains are thrown in the trash next to the utensils.

From this American custom, the Salteño could not adapt, that is why he saw that his business was different. What their service offers is typical of the Argentinean, for example as an entrance, they provide a bite, empanadas or choripán, something that is very strange for Americans, but once they experience this way of eating, they fall in love with the Argentine custom and appreciate it, salteño told the press.

The service offered in that place, he called it “The Asado Experience”, because more than a meal, it is a cultural experience, he said. In this regard, it should be emphasized that, Salteño had the support of butchers from Argentina, and thus was able to achieve the best cuts for his venture. Thus, his business began to see its fruits quickly and began to be recommended in many places.

In fact, Cebrián with his wife cooked for outstanding figures. With his service they were in East Hampton, Long Island, New York, where former US President  Barack Obama was invited to the barbecue. Whoever was the birthday and owner of the house was the right hand of the former president. While Obama did not attend the event, he sent him a greeting through a video. But the truth is that, the service of Salteño with the typical food of Argentines was present in a place where the former president was going to attend the party, undoubtedly “The Asado Experience” stands out for the quality of its service.

And, if it is famous figures, he also cooked for a renowned television host, Steve Kroft, who is a correspondent for the popular investigative journalism show “60 Minutes”.

The events offered by the Salta entrepreneurship has typical utensils that are used in Salta, such as being Tramontina covered, clay vessels from that province, grills made in our country, wooden boards to place the roast. On the other hand, they offer the typical chimichurri, tango and folklore are heard, among other Argentine customs.

Each of these dishes are served every 10 minutes and in a small amount so that your customers do not fill up too quickly. In this way, Americans taste everything a little and the food is served hot. Then for dessert  they offer custard  with dulce de leche, chocolate cake with strawberries, and peach with cream, honey and red berries.

Thus  Mariano Cebrián , a native of Salta, stands out in the United States with the typical asado of Argentines, a venture that was able to position itself in Tennessee, where he is based and increasingly his business is recommended by important personalities of that place.