Home People Argentines around the world A mission in Antarctica

We tell you the story of a couple of Cordoba doctors currently serving in Antarctica. An icy adventure that places us Argentines in a privileged place. 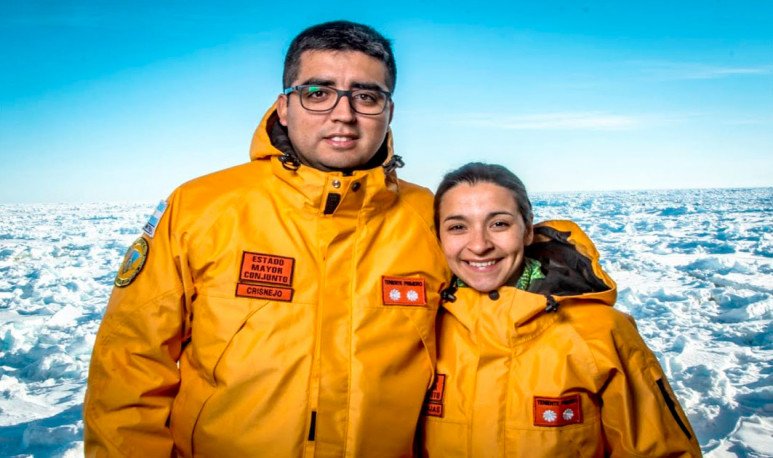 The story has as protagonists Hugo and Giuli,  a couple of doctors who decided to focus on saving lives in Antarctica. Yes: the  white, distant and icy continent, hosts them and has them as protagonists.  These Cordoba heroes  live their day to day in an extreme way exercising their profession.  Hugo Crisnejo and Giuliana Ortiz Rojas  are currently in charge of the Esperanza base health center. These two doctors were born in the Cordovan middle class, and they came far. Together and going through different difficulties, they reached the precious  destination  - Antarctica. Today they work there and are recognized for their overall performance, as well as for their  excellent human quality.

On the one hand, the history of Hugo begins in  1987,  northwest of the city of Córdoba in  the Argüello district.  As a child, he studied primary and secondary education at the Inmaculada Home, near the warehouse that his father ran and was the family business. On the other hand, Giuli arrived in this world in  1989  in the neighborhood  Villa El Libertador.  She did kindergarten at Don Orione High School in Santa Isabel neighborhood. After living in different parts of the city, he finished his secondary education at the San Francisco de Assisi parish school, where he graduated with a bachelor's degree with orientation in natural sciences. From their graduations, they began  a new training .

These two lives, so different and at the same time so similar, finally crossed at the   Faculty of Medicine of the National University of Córdoba   .  They studied some subjects together, presented finals and even  did the final work together . They accompanied themselves as students and companions, and then  choose themselves as boyfriends  and continue to accompany themselves on new adventures. Thus, they received the official  medical and medical  degrees,  graduates from the oldest university  in the country.

In 2015 they gave yes  to the Church and the Civil Registry. A “yes” that would involve relying not only on health and disease, but also on their  professional practices.  Both were prepared with a military college course to make medical residency at the  Military Hospital of Córdoba.  Thus, in addition to becoming graduates of the National, they became  army officers  . After several wanders and different adventures they reached the  white continent.

Antarctica   would wait for you with a thousand more experiences to share. They currently attend a  Cruz del Sur health center in Esperanza base.  They are the only doctors who attend there, so they are in  charge of the lives of more than 60 people living in the complex, as several families are staying at this  scientific-military station. Therefore, they should also take care of many minors. So they are not only responsible for  diagnosing and medicating,  but also  educating and preventing.   Their educational campaigns  are of great importance, as many of the young people at the base study their primary and secondary education there.

So these Cordobeses are not only  exceptional and indispensable doctors , but also transmit their knowledge to families. In addition, the confinement in which these officers and their families are located causes  a very special relationship  between all. And that positively influences the  doctor-patient relationship.

Hugo and Giuli  are fulfilling their second year of campaign  on the  white continent . What they celebrate with mixed feelings. As they miss a little the dynamics of their previous work, and those who are  pro-finding  themselves in the country, but they are aware of their privilege and are grateful to have arrived there, after so much effort.  And together!

Discover our tourist package to the white continent by clicking here

He was quarantined in a hotel and got away ingeniously.

Another facelift for Quino