Home People Argentines around the world A Mendoza in Dubai, with 60 degrees of heat

Even that temperature can reach the thermal sensation in Dubai. There lives a Mendoza who works on the Emirates airline. 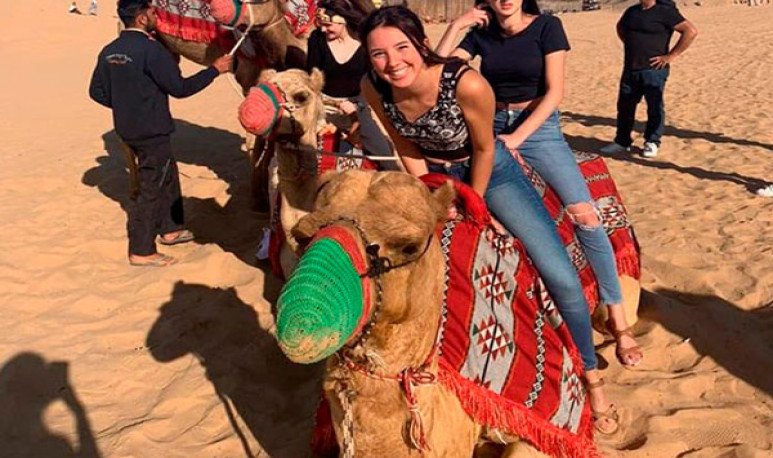 Luciana Balada is 26 years old and is from the department of   San Martín , 45 kilometers east of the City of Mendoza. He always had the idea of going to live abroad, until one day he arrived.  A few months ago, authorities of the prestigious airline “Emirates” arrived in Mendoza in search of personnel. Hundreds of Mendoza participated in the “open day”,  but only some were selected. Among them, Luciana, who assembled the suitcases and left for Dubai.

It was in November that he moved to this metropolis.  The company gave him a labor contract for 3 years, a house to live and share with other people, a salary, services, etc.  However, everything is complicated, product of the coronavirus, especially aviation. Thus, he has seen his salary reduced a bit, although he still receives the rest of the contract points.

As for the protocols for the pandemic, the city looks quite open and circulated.   While you have to use barbijo permanently, you can go to the centre, the beach, restaurants and bars. You can use public transport, which is full, but meeting the requirements.

A lot of heat

What draws the most attention to Luciana is the heat, with a  thermal feeling that can reach 60 degrees . It's desert, but there's a lot of  humidity , a lethal combo. Everything is prepared with air conditioning, bus stops are capsules with air conditioning. People don't go out much, except for work. If not, they're going to the shoppings.  Winter there is like the spring of the Argentines.

He is also surprised by the culture,  women's clothing, who do not show legs, tummy, something very different from what happens in Argentina.  Arriving in a country that has Islam as the official religion, Mendoza was surprised with this culture. Above all, with Ramadan. It is the one-month period when Muslims do not eat, smoke, or drink anything during the day. She had to lock herself up for lunch and drink in the daytime hours. On the other hand, there is the subject of sexual orientations.  Homosexuality is forbidden, and heterosexual boyfriends don't exist, because you're either nothing, or you get married.   Although people who live in Dubai, but are from another culture and religion, they still do. Men and women who live together do so because they are married or because they are  brothers , father and daughter, etc.

Dubai is in the Middle East, but it is very cosmopolitan. It's a mixture of European, Indian, Pakistani people. Being that mix, homosexuality is accepted a little more.  They don't show it publicly, but inside a home, it happens. Luciana said that the allowed is only in the bowling. But on the streets there are no people walking hand in hand or kissing.

Like every Argentine,  with deep roots in his land, he misses the people, the weather and the food, but is also happy with the experience.   The contract lasts 3 years, but can be extended. Anyway, a lot of people got kicked out of the pandemic situation and nobody knows what's going to happen. So, Luciana, you don't think too much about the  future , but live the present.