Home People Sports Of pirates and celebrities: 12 artists from Belgrano

In the month of the birthday of one of the most important clubs in the province of Córdoba, we tell you who are the celebrities who follow him everywhere. 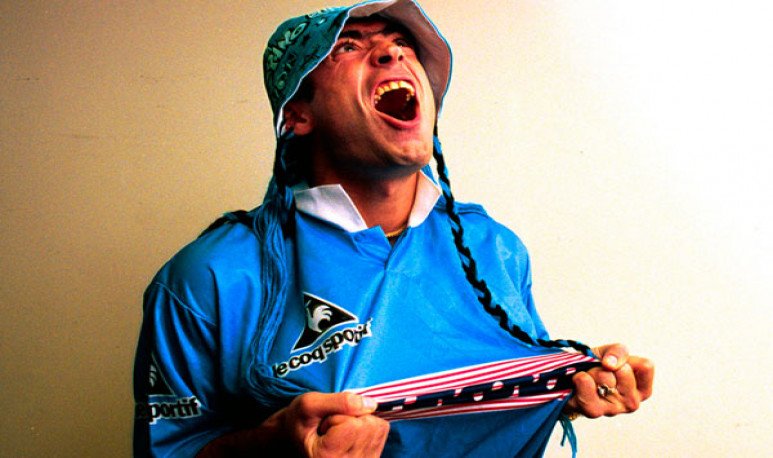 We're talking about Club Atletico Belgrano (CAB) in Cordoba.   One of the clubs with   more followers and championships   of the province. The albiceleste is the deep love of many   local and national artists.   In this list we name you who are the celebrities who wear the pirate shirt. If the club even made a “World Cup of Fans” via Twitter...

And “El Potro” Rodrigo was the winner.   By   be faithful fan of the cordovan pirate   , add to his club in one of his best known melodies and follow the footprint of a family tradition. The star quarteter was a loyal supporter of football in general, but   his true love was Belgrano de Córdoba,   whose shirt knew how to look publicly in   more than one chance.

The Mona Jimenez is a Cordovan reference,   and his followers are from all the country's paintings. However, he has a marked preference that does not lose opportunity to show and is   his love for the pirate of Alberdi.   In his traditional dances he usually wear his shirt, but on stage he also pays homage to his followers noodles, because   his passion does not take away his humility   to take care of their own.

Other   quarteapot in love with the albiceleste of Alberdi.   She is an artist who delights the entire Cordovan population with her quartets, since 1999. In an interview he knew how to confess:   “For me Belgrano is a passion, it's my life. It always has been and will be. I think that   my love for the club is going to be forever.”

From a family tradition,   this quarteter follows in the footsteps of his brother and his relatives. Follow the pirate everywhere and more than once he performed on stage   with celestial and white.

La Sole García, one of the most claw lionesses in history   has celestial and white blood in the veins.   Not only for the Argentine field hockey team, but also for its   Ueridisimo Atletico Belgrano Club of Cordoba.

Another reference in the national sport who chooses to paint his heart with blue and white.   This basketball player   of   the golden generation   takes care of and follows his Cordovan team with the enthusiasm of an inveterate lover.

The famous swimmer who represented us at the most important Olympics and in renowned tournaments, also chooses celeste and white to dress up his passion. The   former world champion in 50 meters   free became selected by the same institution as   Godfather General of the club.

Between football and humor   , The Skinny moves like fish in the water. Faithful follower of Belgrano, this   actor, conductor and comedian   , watch the games and he escapes his foosball madness. This fan always tries to leave a message   from his passion   , urging the pirate bar to manage in peace and without violence.

Humor seems to be   always on the side of the Cordovan pirate.   Carlos Alberto Álvarez, another of the iconic characters of the Cordovan comedy, popularly known as El Negro Álvarez, is also a faithful fan of Belgrano.

An iconic character   of Cordovan humor, who chooses Alberdi's club to be   the owner of his joys and his sorrows.

While he dedicates his life to pursuing political ideals and even fought for a presidential candidacy, Nico del Caño does not leave his sporty side aside. He is a faithful fan of the club celeste y blanco Cordoba, and enjoyed many times going to the court   to live the popular ritual and the fever of the fan   inveterate.

Calu Rivero was born in Catamarca, but spent much of his childhood   in Cordoba   . This turned her into   faithful fan of the Cordovan pirate.”       I'm from Cordoba, Belgrano... Pirate.   Because of my father we lived in Alberdi, one block from the court. So yes or yes,”   he knew how to testify in a media interview.

This sympathetic actor   who is currently competing Master Chef, is a faithful follower of CAB. More Cordovan than the fernet himself with coca, Daniel was part of the cast of otro piarta's film Rodrigo El Potro.

Cordovan pirate: a passion, many disciplines

Club Atletico Belgrano: the birth of the Alberdi Giant

A generous country and a recipe that is not magic

Cheer up to the first yoga class with Patrizia!