Home Gastronomy Why do we eat gnocchi all 29?

Do you know where that custom comes from? We tell you and, by the way, we leave you a recipe for potato gnocchi. 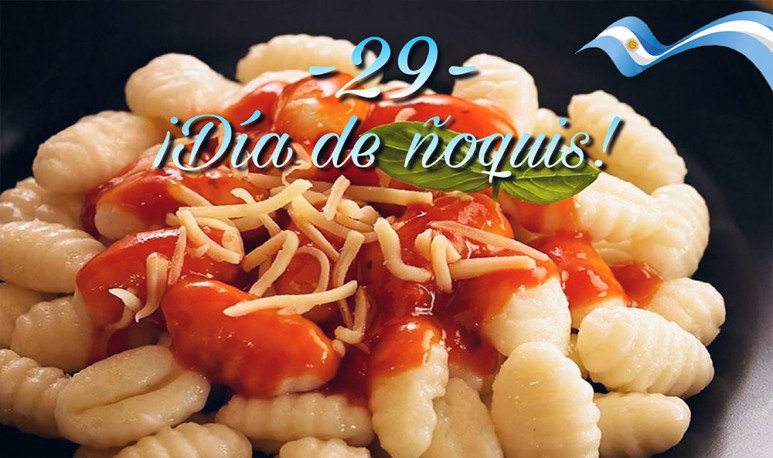 In times when it seems that nothing is as it was, there are certain traditions that make it clear to us that some things never change. For example, the beautiful habit of  sharing with the family , sitting around a large — or not so big — table and enjoying a rich meal. Food, meanwhile, is also full of meaning. Rarely a dish is just a mixture of ingredients arranged in a certain way.  Every meal brings with it a story , a baggage, a path that brought it to our table. Today we are going to talk about  gnocchi , legacy of our  Italian immigration , who have reserved a special day on the calendar in which we gather to eat them.

Gnocchi  — or  gnocchi , in Italian — are one of Argentinean's favorite  pasta  . While they have many variants, the  recipe for potato gnocchi  is the most traditional of all. With few ingredients, you can prepare a delicious dish, filling and that brings us memories of childhood and bread wet in the tuco.

In all Argentine houses, there is a date marked on the calendar of the month to enjoy this delight:  the 29th day . In addition, there is another part that completes the rite: it is said that  placing money under the plate  brings good omen. So, just in case, we all do it. But where does this custom come from ?

The custom came to Argentina — of course — from the hand of  Italian immigration . But there are two theories that explain the beginning of that tradition. The first dates from the 8th century and originated in the Veneto region in northeastern Italy. According to them,  San Pantaleón  was a young doctor who, after converting to Christianity, began to pilgrimage and heal sick in that area. There he practiced miraculous healings for which he was later canonized.

One night, he approached a family of peasants and asked them for some bread. They  invited him to eat and served him gnocchi , even though they did not have many  resources . Thankful for the noble action,  San Pantaleón predicted a year of excellent fishing and harvests . That episode happened on the 29th day. And the omen was fulfilled. Therefore, from then on, the visit of Saint Pantaleon is commemorated on that date, to ensure that the good omens continue.

The second theory about why 29 is the day of gnocchi is much more earthly. Near the end of  the month, low-income people arrive with the right money . That is why they choose dishes that they can prepare from the  cheapest raw materials , such as potato and flour. As usual,  some banknote or coin is placed under the plate as a symbol of good wishes,  to attract luck and prosperity for the diner.

If you were hungry with these stories, we stop the  recipe for potato gnocchi  so that this 29 does not catch you unsuspecting.

Add your favorite sauce to them and don't forget about the little ticket under the plate.  Happy gnocchi day for everyone!