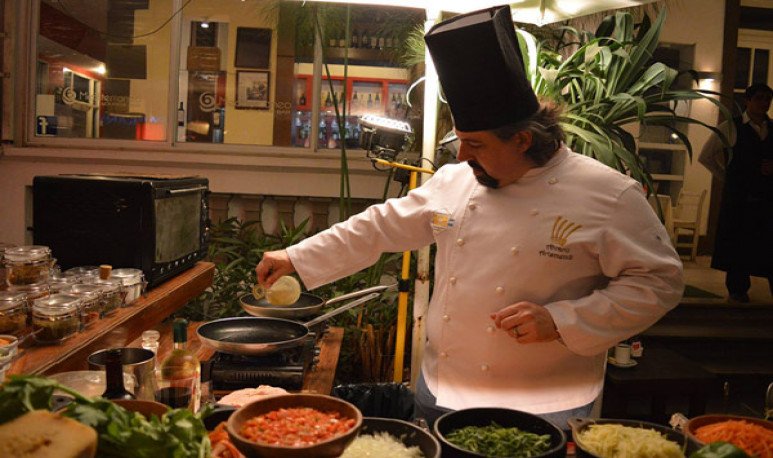 When it comes to typical meals, the cook  Álvaro Arismendi  is the expert to perform this task, since the  Tucumano  has almost 30 years in the gastronomic trade and to make dishes with products harvested from the region. In addition to being the owner chef of Arismendi Restaurant Escuela de Montaña, he is also a food and beverage manager, and consultant for various companies locally and nationally.

Being Argentinean  spoke with Arismendi.  In addition to the above, he told us that, since 1999, he has been dedicated to the formation of the Nueva Cocina Argentina movement (CNA) nationwide, which is dedicated to the value of products, techniques and recipes from the different regions of the country with emphasis on the region NOA to which it belongs. It should be noted that the  cook  tucumano traveled through the years almost all the culinary styles.

Once we asked him about the restaurant he is in charge of, chef Tucumano told us that these are two ventures.That is, two restaurants under the same name that currently operate in two locations:  Arismendi Restaurant Escuela de Montaña . The central house, which was the first venture in the Tafí Valley (3 km before accessing the villa), is located in front of the imposing La Angostura Dam, from where you can enjoy the view of the entire valley.

On February 2 last year, the restaurant was inaugurated, which has a capacity of 40 guests inside and ample outdoor space. It should be noted that, to provide typical meals in the area, the restaurant has its own vegetable garden and planted fruit trees that promise fresh fruit and  vegetables  on the foot for the preparation of Tucuman dishes.

A secret that was unveiled to our medium in terms of cooking, was when  Arismendi  confessed that, to make meals, it is based on cooking them in clay pots, with irons on the embers, in well (wateada).That is to say that the Tucumano chef uses ancestral tools to make the typical meals offered in the Tucuman valleys.In addition, he told us that all the chacineria used in its restaurants is of its own production. Tucumanos enjoy every time they visit the place a rich raw ham, cooked natural and smoked, smoked loin, cured bondiola, sausages, salames, smoked bacon, and in milking season also some cheeses that are made in the area.

In October 2020, its second place, Arismendi Restaurant Escuela de Montaña, opened its doors in Av. Belgrano 177, meters from the main church of  Tafí del Valle , within the framework of the Hotel Tafí that is currently completely renovated. “In front of the hotel there is an imposing terrace where you can enjoy sandwich shop and pizzeria. Also with our line of pochocos and churros salted, spicy or with raw ham, bacon or local cheeses, four beer taps and four wines per glass. Truth is an unparalleled sensory experience,” Arismendi told Ser Argentino.

Finally, we wanted to know in depth about the NCA movement. Arismendi explained to us: “Nueva Cocina Argentina is a nationwide movement that brings together hundreds of cooks, agricultural producers and tourism service providers aligned with the idea of positioning the country on the tourist map worldwide, enhancing and enhancing our culture, our identity, and the great value of our products and services highlighting the origin and origin of each of them and, thus contributing our bit to the development of regional economies, strengthening us as a free, productive and independent nation,” he explained.

In this way,  Arismendi Restaurant Escuela de Montaña has several secrets to make the best typical meals of Tucumán, the clay oven, the coals, its organic vegetable garden and condiments in the area are some of the secrets to keep in mind why these dishes are so unique in the  Tucuman valleys .