Goulash is a typical Hungarian dish. In a village of Santa Fe they make it delicious, but following a German recipe. 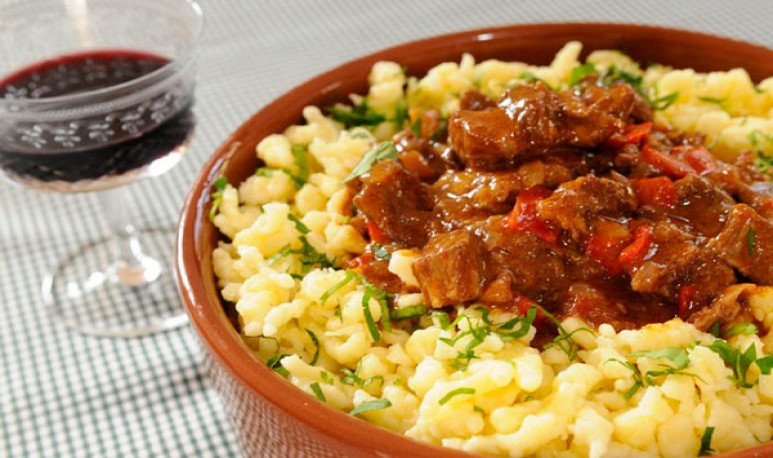 Humboldt is one of those prosperous  villages in  the interior of Santa Fe. Already by its own name, it is felt that  these payments are trademarks of European immigration . In this case, he's German. The entire area of Humboldt, with Hope at the head, was colonized by Germans, whose lineage is still traced in these Argentines from town. Their customs remain in various respects, one of them, the culinary. There is a meal that is not German, but it is, a long time ago, one of the main dishes of the country's cuisine, and we are talking about goulash, originally from Hungary. So rich they prepare goulash in Humboldt that, for  a few years, in the village they encouraged themselves to have a regional festival  called “Great Goulash”. It's a success. They come from all sides  to taste this delicacy.

As it is actually a familiar dish, we found out in Humboldt a recipe for goulash. If you encourage him,  we leave the ingredients and how to prepare it .It is a recipe cooked on low heat, with a well spicy sauce. Its basis is meat, onions and paprika, so we can say that it is a dish  of humble origin. The traditional is to use typical cuts of beef. In fact, preparing it is very economical because second-hand meat is used, that is to say cheap cuts such as roast beef or carnaza. The big secret of goulash is the cooking time, which can last between two and two and  a half hours, and that is what makes these meats end up resulting in exquisite tenderness.

Also, do not be scared by the cooking time, because once you put the ingredients in the pot, just take a look at them and stir every while. With all certainty, the result is worth the wait.

We're going to get all the fat we can and  cut it into small squares . We cut all the meat and salt it (this is very important).

Then chop the onion or cut it very small. One tip: let's try to use good onions (they are not soft or odor) since half of the recipe consists of onion.

Once we have onions and meat prepared, we go to the fire. Place a large pot and sauté with very little oil the  onion  until it is almost transparent. While the onion is cooking,  add a few pinches of salt or a tablespoon of sugar to take out all its juice.

Then we add the meat that we had previously salted for the same reason, so that it gives all its juice. Cook the meat until it is sealed (browned) and add hot water until cover the contents of the pot. Right there we added some laurel leaves.

We leave to cook until the water evaporates. Once we see that it is almost all evaporated, we add more water and now yes: paprika or paprika, pepper and glass of wine. Let's see that our preparation takes a  reddish color. At this point we can add  tomato , which will make the preparation softer, and even more reddish.  It is also useful to use it if we overdo it with paprika.

We leave to cook again and refill with water as the preparation dries. When we taste the meat and it is tender, we can already stop adding  water . We just let it evaporate  until it is reduced to a saucet.