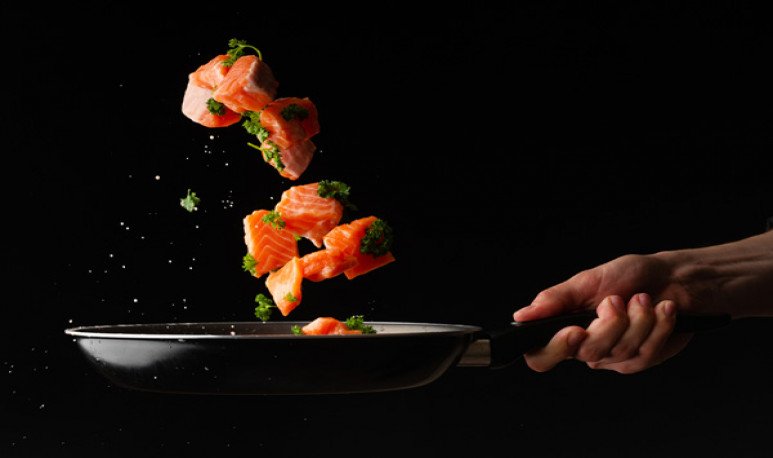 While one mentions   Patagonia   and the first dish that comes to mind is   lamb   — in any of its variants of preparation — in the water there is also plenty of material that makes up the gastronomy of that region.

Salmon , which in the province of  Chubut  is honored with two popular festivities — one in the C Ordillera  and the other on the shores of the Argentine Sea— is a delight that, whatever way it is cooked, is exquisite. Here are two recipes.

To prepare a delicious  salmon mousse  we will obviously need the fish in question: about half a kilo will be fine. Also essential is a cup of milk cream, 3 egg yolks, 3 whipped whites to snow, necessary amount of breadcrumbs, butter, salt, pepper and nutmeg to taste. For the kitchen there is everything, and you also have to have aluminum foil at hand.

Once you have all the ingredients, you have to preheat the oven to medium temperature and put the salmon in a pan with butter, and brown well from both sides. Then you need to crumble the fish, season and mix with the milk cream and yolks, and then slowly add the whipped whites.

Once the preparation is finished, it is dumped into a pudding bowl previously greased and sprinkled with very fine breadcrumbs. Then take it to the oven to a bain-marie for 40 minutes, covered with foil. Once warm, unmold the mousse and cool in the refrigerator. Bon appetit!

The preparation starts by cooking the salmon in the  wine , simmer for 10 minutes, and set aside in a bowl. Once the fish is cold, stir the thorns. Next step, melt the butter and sauté the onion and garlic until transparent and begin to add the flour gradually, stirring so that it bind to the butter without lumps forming.

This mixture must be added to the salmon and then add the mashed potatoes, seasonings, cream and yolks, and process. Beat the whites to snow and add to the mixture with enveloping movements. Dump over the cake and cook in the oven at medium temperature for 40 minutes.

Everything is ready, although some recommend serving it with cream seasoned with mustard to wine, and accompany with green salad. Bon appetit (yes, again)!

Among the many popular festivals it has during the year, in the province of Chubut there are two that celebrate salmon. Both in summer, but at totally opposite points in the Chubutense territory.

On the first weekend of January of each year, the small but colorful town of Carrenleufú, in the Andes Mountains, performs the Provincial Festival of Pacific Salmon. There are three days of celebration in which fishing competitions are held with important silver prizes for the first three of each category. There are around ten thousand people who visit the activities, food stalls and artisans fair in each edition, with a great popular dance in the evenings.

In the following months, the town of Camarones hosts the National Salmon Festival, which brings together fishermen and the general public on the shores of the Argentine Sea. Since 1990 it has been recognized as a National Holiday and incorporated into the calendar of the Ministry of Tourism of the Nation.

There are the traditional fishing contest held on boats, coastal fishing contest, the election of Queen and Miss Salmoncito and a great free popular lunch called “Chupín del Pescador”, which closes the event.