Home Gastronomy Three empanadas you have to try

In Patagonia you can find recipes for empanadas that are a real one-way trip. 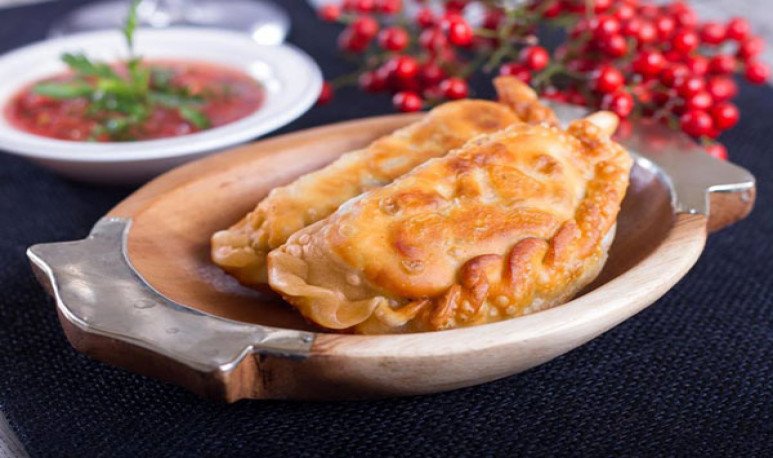 The Patagonian region consists of  Tierra del Fuego ,  Santa Cruz ,  Chubut ,  Rio Negro ,  Neuquen  and  La Pampa   . From three of those six provinces come types of empanadas that you won't find anywhere, but which are worth dying to try. No meat, ham and cheese, chicken, or other tastes more played like bacon and plum, that would arouse the anger of any detractor of sweet and sour cuisine.

It is a pampean recipe for which we need a kilo of  ostrich meat, two kilos of onion, two boiled eggs, olives, salt, pepper, cumin, bay leaf, ground pepper and paprika to taste, necessary amount of cow fat and —Obviously— empanada lids, you choose whether to fry or for oven.

With the ready ingredients, you must proceed to grind the meat and then finely chop the onion and put to fry in beef fat, with a handful of salt. Once the onion is cooked, add the meat, season to taste and cook over low heat. Then you need to cool, fill the lids, lay out the hard-boiled eggs and olives, and close to baking, or fry in oil.

We travel from La Pampa to Rio Negro for this recipe, for which we need 750 grams of  capon tummy, half a kilo of onion, two tablespoons of oil, two fat, a bell, oregano, salt, ground pepper and pepper, half a kilo of flour, 125 grams of fat, salt and water.

You have to start by cleaning the capon's tummy and peel it well, then boil it until it is well tender (more or less as is done when we cook locro). Then it is chopped very small.

Meanwhile, you have to go sauté in oil and a little fat the onion -chopped and add the bell, seasoning with oregano, salt, ground chili pepper and then add the chopped  mondongo  .

For this recipe the tapas for empanadas were not contemplated, because they will also be homemade: for this you have to mix flour, fat, salt and hot water (all by eye). It has to be sober well, since the dough should be smooth, and let it stand about half an hour. Then it is stretched thin and cut to make the discs from the patties, which are assembled with the ready-made filling and made repulgue to them. They are cooked in hot fat taking care as long as they are not going to burn. So you have to be very attentive all the time.

Coming to the end of the world, in Tierra del Fuego we find this recipe for which we need a kilo of lapas, octopits or mussels, 300 grams of onions (which can be green or mechar both), a bell, chopped fresh parsley (or coriander, is also an alternative), salt, pepper, oregano, paprika to taste and 24 tapas of empanadas.

The preparation starts by chop the onion and the bell well small to place it in a pot and sauté in oil until the onion is transparent. To that we add mollusks already previously steamed, with a little cooking water (since it contains all the flavor). Season and cook 10 minutes on moderate heat and then allow to cool; place the fresh parsley and start assembling them with a full tablespoon on each lid and cook in the oven for 15 or 20 minutes, depending on the oven.