Home Gastronomy This meal is a dough!

A typical Mendoza recipe. Beef with vegetables. So far, nothing new. However, the secret is that it is cooked inside a dough. 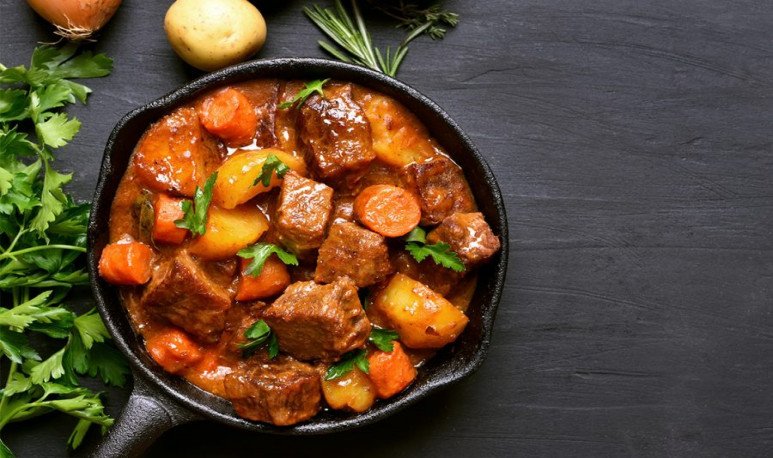 First of all, we must say that   it's not a   easy recipe. In addition, it is one of those recipes that are cooked overnight because it is important to let some preparations stand. However, it is a   mendocina recipe par excellence   and a dish that does not cease to surprise. It's basically.   a portion of meat and vegetables, which are cooked in their own juice,   which generates an unparalleled blend of flavors. And everything remains, for several hours, inside a mass.

Mix flour with fat in a bowl (if we add rosemary, thyme or jarilla have to be chopped all fine),   salt and water in necessary quantity until you take the dough homogeneously   . Knead for several minutes and let rest.

Observation   : This mass should be slightly wider than the size of the font to be used and twice as long.

Preparation of the filling

First the marinade is prepared, for this   mix the ingredients in a bowl and put the cut meat (into pieces the size of a fist) to marinate 24 hours before   . On the other hand, cut the vegetables into julienne or large feather, and sliced carrots. Greet the baking dish so that the dough does not stick and arrange it on the dish. In this way there is a portion outside, which will then be folded and used as a lid, generating a dough with oven function, which contains heat.

Place   meat and vegetables inside the dough, seasoning to taste with salt, ground chili pepper, a drizzle of chimichurri preparation   and add pepper into whole grains, along with thyme.

Once it's all inside the source,   take the other half of the dough and put it on the meat, closing it as if it were a lid. Rethumb gluing the edges and put in the oven, to   soft fire   for the first 15 minutes. Then over medium heat until the dough is browned   . Leave in the oven for an hour and a half. Then bring to the table in the same fountain and serve. It is highly recommended to eat bread from the crust, its taste is delicious. What remains is simply to enjoy with family or friends.

You can also add rosemary, thyme or jarrilla so that the same mass has aromas and is transmitted to the meat. Fat is at the taste of the person. One option is marrow fat, a spectacular twist for the taste of a different mass.