Sitting at the table and waiting for the meat to be served is the tip of a huge iceberg that means making a roast. 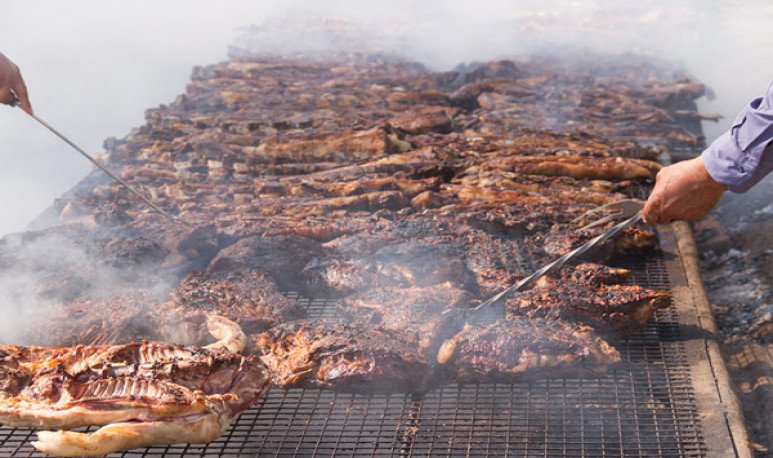 The asado is our national identity card. It represents and stands out internationally. Our  meat , and the way of roasting, make the roast a distinctive and unmatched element worldwide. In this case,  we will analyze the roast as a social and cultural phenomenon , and its highlights. From the fire to the cuts that are cooked on the grill. From the procession that means to make a roast to the table.

The roast starts from the moment it is planned. In its genesis. When  a friend says to another, “Che, let's make a roast.”  Or when the family agrees to get together for lunch on Sunday. There they tear the foundations of this huge culinary structure.  Who buys what. It is the right one to buy the meat, because it is the one that tastes the most and, surely, will be the one that will then fight against the heat of the embers.  The rest of the errands are distributed, to get the basics: bread, vegetables for  salads , drinks and firewood. Those are the 5 basic components of a good roast.

Another aspect to define is  where the roast will be eaten . As such,  this meal assumes the presence of 4 or more diners.  Hardly arrange a roast for 2 people, for example. In this regard, many people are reluctant to host and receive a large number of people into their home, with the consequent discounted disorder that will remain after the event. However, in a group of friends or a family group, there is the court where it is played locally. That is,  the house where the comilona is usually organized. The owner of this home is already resigned and learned to love and enjoy being the host.  This happens because that house is usually larger, more comfortable, has a patio, and even the existence of a pool, are the recitals at the time of making these decisions.

Guests give the present, although not the totality. There are always those who are late, with cutlery in hand, to sit down to eat, do not fill with smoke and not to help with the assembly of the table or salads. But those who are from early on get down to work. The grill manager is installed in your sector. Light the firewood (or charcoal) and see how the first flames of a fragile daily paper (already very difficult to get) begin to spread between wood or coal.

In another sector they started the mattes and the talks. Vegetables are cut into slices or julienne. The lettuce is washed and everything is resting, on the counter, waiting to be seasoned. Then,  the same task is the ones who also predispose themselves to setting the table while impatiently asking: “How long is the roast?”.

In the middle of all this, the grill came into the kitchen, took the meat from the refrigerator,  salt  from the cupboard, a fountain, knife and fork. He went to the table, in front of the churrasquera. There begins the surgical process of salting meat.

It is necessary to make a separate paragraph for this time.  Some say that it is the same as salting any food, and that it is enough to drop salt on the meat. But others have a whole technique to do it.  In the first instance, it is important to clarify that the grill salt is the entrefina. Neither the thin, nor the thick. “With salt it enterfines, the meat absorbs what is appropriate and discards the surplus,” say those who know. However, those who, in theory, know a little more, say that even using the enterfina salt, you have to place the right amount.

The key point, and on which there are the most found opinions, is when to salt meat. Some prefer to do it sooner because they consider it the only way for salt to be absorbed and impregnated well. Others prefer to pour the meat on the grill, salt it on the side that is up and then, when turning it over, salt the rest. And finally, there are those who put the meat without salting it, and they just give a single hand of salt only to the face of the meat that was golden in the first place. Of course there  is also the option of not salarlo, but that doesn't respond to our tradition.

The asado is served

The barbecue is served by the same barbecue. It is he who will leave a marked groove between the grill and his chair, going and coming to attend to diners.

Ideally, have a  brazier. It is a tray with 4 legs that, under the lid where the meat is placed,  has a space to place embers and generate heat to the roast served. But, if this turns out a luxury inaccessible to many, then a wooden board will suffice. This is what our tradition marks. No veneer trays or ceramic plates. The roast is removed from the grill, cut on a wooden board and served.

Here we need to clarify some aspects. It seems obvious, but  the roast is cut, and the pieces are accommodated respecting the original shape of the original piece of meat. No serving the big piece without cutting. But it is also necessary to mark that there is a certain tradition and custom when choosing what is first brought to the table.  Any roast should begin to be served with sausages and black pusages. At most, some churas can accompany. What is served below may be considered by the barbecue or the taste of the diners.

However, there is a technique that usually perform some old grill foxes. It's the one to leave the best for the end.  If there are gizzards on the grill, these are offered when more than one diner has already crossed the cutlery over the plates . So the spit asks, “Does anyone want a melllejita?”. So, there will be less those who eat because many will be full. “So, those who really enjoy it eat it,” explain the grills.

This is the awkward time of the roast. Of course,  in case of a family barbecue, you don't usually share the bill. But, in case of a roast among friends, and with today's prices, the account is divided. After the roast, dessert and coffee, when some are raising the table and others look the other way to zafar, shoppers say, “Che, do we deal numbers?”.  To which some wretch responds, “Uh, I forgot my  wallet ,” like a funny little joke.

As a rule, the one who bought will be harmed. The differences resulting from the accounts will always be in favour of diners. If there's no change, “I'll give it to you later.” Another one has no cash, “I'll transfer it to you tomorrow,” he lies.

That's how to end a roast. A long road that, as has been explained, has several stops and stations. All must be respected and, above all, enjoyed. Because eating a roast is not just sitting at the table and eating a piece of grilled meat. It's all we just explained.