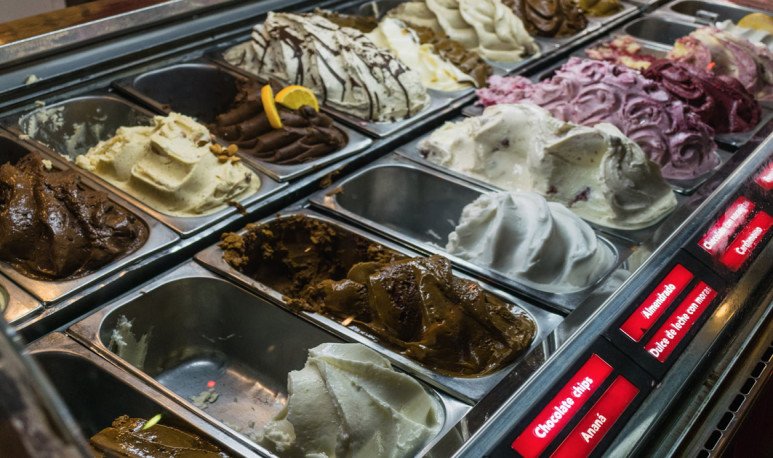 If we talk about ice cream, tradition and one of the most visited cities in the province of   Río Negro   during the year but especially in summer time, you can not stop side to the  ice cream shop Jauja . Its beginnings were not specifically with ice cream or in the Patagonian city, but what has continued unchanged since 1982 is the creativity, sincerity and quality of the products made in an artisanal way. A story that transcends borders.

Jose Julio “Pepe” Mazzini and Lucia “Lucy” Adler lived in the village of  Villa Gesell , in  atlantic coast  of the province of Buenos Aires.  In the 1960s they started with handicrafts and didactic toys, no restaurant or chocolates. Between the 70s and the 80s, they began to devise the brand that years later would be trending and part of the local  Bolsonan culture: from the beginning they were characterized by the quality of materials used and by creativity when performing it.

In 1980 the Mazzini family moved to  El Bolsón , where they began (shortly after) their new craft activity: gastronomy: at first, sale of sanguches and alg just another ice cream. But Lucy and Pepe found a fault: the regional gastronomic offer, that of the   Andean Region of Parallel 42   in its entirety, did not really provide its delicacies: the restaurant “La Cocinita de Jauja” arose with various regional dishes and an ice cream shop that would gradually become what is now known as El Bolsón and the whole   Patagonia   brand.

It has been just over a decade that the reins of the project born in 1982 were carried out by his children: Camilo Mazzini is in charge of directing the company and Melchor, his brother, of the creative contribution to products and marketing, supported in his studies as a screenwriter and producer

The story continues to be written with Lucy bringing her magic and experience and with Pepe seeing how it continues to consolidate what she had dreamed from the beginning: same impetus and spirit to move a good producer  Patagonian .

The history and philosophy of work in Jauja is about being a faithful reflection of the region's everyday life: an articulation of quality, cordiality and creativity.

Ice cream is with natural, genuine, healthy ingredients; they report sugars, that  the vast majority of their flavors are  free of TACC  , these are not yet certified “    Suitable for Celiacs .”  They also supplement with nutritional information so that those who decide, always do it consciously and responsibly because Jauja is also responsible for its customers.

Jauja also has a factory, a few kilometers from El Bolsón, on provincial route 16, road to  Lago Puelo  (in the neighbouring province of  Chubut  ): it is the production room, overlooking the   Cerro Piltriquitrón  and the  Andes Mountains   . There you can see how the different flavors of the most traditional ice cream of the town rionegrina are being prepared in an artisanal way: how fruits and other ingredients are selected, how they are mixed, cooked and pasteurized.

A visit within the world of possibilities that opens in El Bolsón, this city of Rio Negro on the southern border with the Chubutense province of great national and international recognition. So you know: as a dessert or refreshment after seeing the artisan fair in Plaza Pagano, or after arriving from a hike or climbing a Cerro. Ice cream while enjoying some other drink, sitting on a lawn or discovering new places while the sound of some musician is heard in the background.