Sergio Vilca is a chef who has prepared delicious dishes for world cuisine. 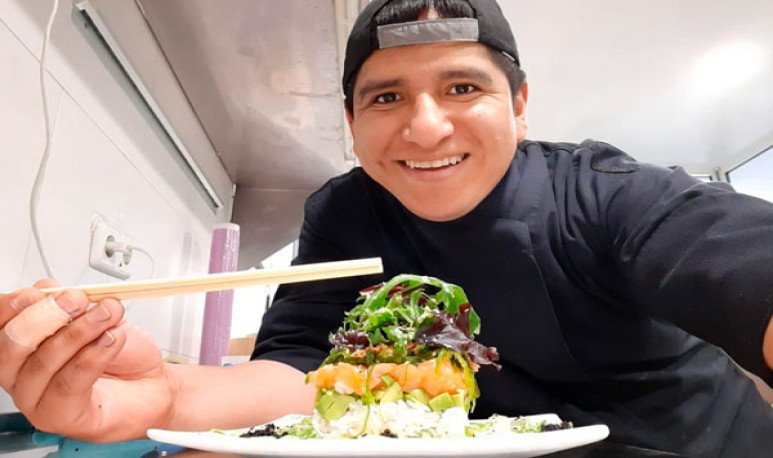 Sergio Vilca, a native of Jujuy province, always had a strong conviction to move on in his  dreams . Forward, exceeding each goal, that way he was able to bring his knowledge to world cuisine. Today, he is a renowned chef specializing in Asian cuisine, as is the acclaimed sushi.

Sergio spent his childhood in Barrio San Cayetano, Jujuy, in a large family composed of his parents and five  siblings . At an early age he helped his mother cook. But, the real decision point that led him to be what it is today was something resounding. While watching TV, he watched a chef cook rice, make a homogeneous preparation and transform it into a roll. What that man cooked was just sushi. When he saw the program completely, it was also said that he would pursue that career, which was going to be an adult.

At the end of high school, in 2002, he entered to study at the Integral Gastronomic School of Celia in the capital of the province of Córdoba. At that time, the country was going through a devaluation and therefore a rather problematic economy. For these reasons, Sergio's parents could not continue to pay for his  studies . Before such a stone on the road, he did not faint and went on. While he did not continue his gastronomic studies, he did a bartender course. With the new knowledge he was learning, on the way new doors opened in his homeland. Dances, together, friends in combination with Jujuy's Gymnastics and Fencing matches, were part of a youth that I enjoy with happiness. Until, at 26, he resumes his studies at the Instituto Superior Gastronomic School ¨Quinoa¨, a recognized establishment in Jujuy.

When she was in the second year of her career in 2013, she received a devastating news: her mother had passed away. It was something that struck him in a tragic way. Very sad about what happened, with the support of his family he continued, with a steel conviction towards his goals. At a  firm  step he studied until he received himself. With title in hand, new opportunities appeared.

Your passage through Japan

While working in the province of Salta in a famous restaurant, at the age of 30 he got an email. The email was a particular invitation to go to work at the Los Tajibos Hotel, located in Santa Cruz de la Sierra in the neighboring country of Bolivia. He worked there for two years and eight months. During his stay he learned how to make sushi with fish from Lake Titicaca. Because of his aptitudes with Asian food, a couple captured their culinary skills, so he was invited to work in Japan. He immediately accepted the proposal and traveled to the country of the rising sun. There he learned the technique of traditional Teppanyaki, which is prepared on a steel plate, providing a  show  to diners while mastery cooking the dish. The first days he arrived in Japan, he was with his colleague Gonzalo Mamani in Nagoya. Then he went to Tokyo and subsequently to Suzuka, where he had a monumental display of his techniques. For him, visiting that country was like living in a chapter in the animated series “The Supersónicos”, he told local media. The comparison came as Japan possesses unparalleled advanced structures and technologies.

After three months living in Japan, Vilca decided to go to Barcelona with a view to working there. Already in the Spanish city, he went to an interview in Vic, capital of the Osona region, where he currently works.