Sunchales is a town in Santa Fe with a wide variety of cuisine. The recipe for ribbons noodles comes from there. 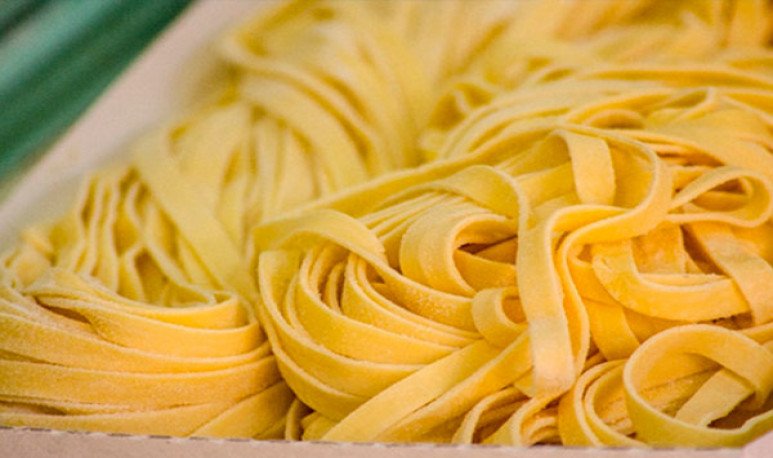 Among the localities of the Castellanos department, in the interior of Santafesino, Sunchales is a city with a very  differential feature. Its entire region is mostly populated by descendants of Piedmont, a town that left very traditional marks. Sunchales, on  the other hand, having adopted cooperativism many years ago and because of the enormous social impact of his huge Libertad club , has “another wave”. Its people have cultural customs much more similar to that of larger cities. One of the points where that is reflected is in the kitchen. Sunchalenses are to cook a lot at home, but the dishes are of varied origin. On this occasion, from this large dairy center we get a recipe for homemade pasta.

As always Argentines  put, to get together, the excuse of eating something . The “pizza ribbons noodles” became a traditional call, especially in winter, among Sunchalense friends. The idea is that the group enjoy an Italian meal accentuated by the taste of another typical dish, pizza, with the variant of something very santafesino: sausages or  salamines  grilleros. A classic of the Argentine asado. The result is a mixture that not only unites the gastronomy of two countries closely related to each other by their blood and their affections, but also allows the union where flavors and bonds are confused and renewed.  Creativity, audacity for change and especially wanting to entertain those who share a moment, make it possible for the old recipes to aggiornate and have a different flavor and a diversity of ingredients that reflect the crucible of races that is Argentina. Of this national quality, Sunchales is worthy representative, thanks to the number of foreign people and from different parts of the country who have come to compete in his  club .

Required amount of oil for frying, two medium chopped onions, six salamines grill or half kg of sausage, a 340 g sachet of pizza sauce, four medium cups of water, salt and pepper to taste. In addition: half kg of homemade or fresh noodles type ribbons half cm wide, salt, oil and water.

Peel and finely chop the onions and cook in oil until  transparent  and golden brown. Add the six grill salamines or sausages cut into pieces (previously peeled sausages) and season with salt and pepper. Cook them next to the onion,  stirring permanently so that it does not stick the preparation  or burn onions.

When the salamin or sausage is cooked, add the contents of the pizza sauce sachet, mix everything very well, season again with salt and pepper, add the 4 cups of water and continue to mix.

Cook the  sauce for half an hour stirring  very often so that it does not stick and let it boil about three minutes.

Apart place on the fire a large saucepan with three quarters of its water capacity, to which I add salt to taste and a few drops of oil to prevent the paste from sticking together.

When the water is boiling, fresh or homemade noodles are added and I move them.  I cook them between 4 and 5 minutes and try them to see the point.  They have to be “al dente” and not pass cooking.

Three meals to get to know the Argentinian Chaco

Which of these elements do you choose for frying?