Home Gastronomy Recipes with apples from the Alto Valle 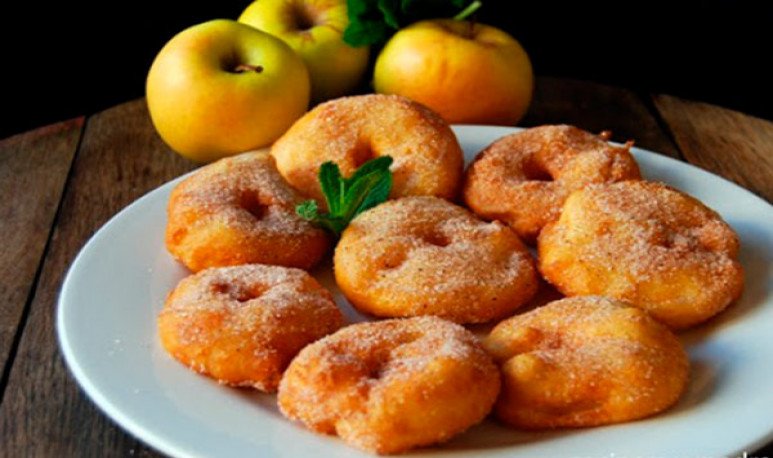 The area of the  Alto Valle del Río Negro  is a region by excelence for harvesting  apples and pears  . Located on the banks of the river that bears the same name and the confluence of the  Limay and Neuquén rivers, it covers 20 towns in Neuquén and  Rio Negro .

There, in addition to trying fresh apple as fresh from the tree, there are exquisite recipes to try and share with your family and friends.

For this preparation we need half a kilo of apples, 125 grams of sugar, 250 of leavening flour, a quarter of a liter of milk, three eggs, vanilla essence, oil and impalpable sugar to sprinkle.

We start by washing the apples and, after drying, peel and remove their hearts to cut them into cubes.

Then place the eggs in a bowl and beat them until they are sparkling. To that is added sugar, 1 teaspoon of vanilla essence, 1 tablespoon of oil, flour and milk, whisking -with a wooden spoon or a blender - so that lumps do not form. To that preparation are added apple dices.

When it is ready, Put on the fire a frying pan with plenty of oil and, as soon as it begins to boil, dip small portions of the mixture into the oil until golden brown and removed by placing them on napkins so that the oil is absorbed.

Once everything is finished, put them in a bowl to sprinkle the impalpable sugar, and they are ready to eat.

For this recipe we need ingredients for dough, filling and bath.

For the dough it is necessary to have 125 grams of corn starch, 375 grams of leavening flour, 150 grams of sugar, two eggs, half a lemon peel and 200 grams of butter.

For the filling you need 750 grams of apple, half a dessert spoon of cinnamon, 125 grams of sugar, 100 grams of raisins and 100 grams of pine nuts praline.

For the bath, 200 grams of impalpable sugar, 3 or 4 tablespoons of water and three drops of lemon.

Once we have all the ingredients, we sift the flour and corn starch and then place on the table forming a hole in the center. Add eggs, sugar, lemon peel and butter cut into small pieces, and then knead and join the preparation.Let her rest in a cool place for an hour. In the meantime we can prepare the bath, gradually adding water and lemon to impalpable sugar mixing until forming a cream.

After the break time of the dough, we proceed to divide it into two parts to stretch until we reach the size of the grill to be used, previously butted.

Place one part in the pan, prick and bake for 10 minutes in a hot oven. Withdraw. Place the filling and cover with the remaining dough to cook in oven on medium temperature for 40 minutes. A little before removing, cover with the bath. Remove and cool.

Welsh settlers who arrived in Chubut  and settled in that province in 1865 brought with them recipes and also devised new ones in their new home to share with the rest.

For this preparation we need two cups of apples cut into cubes, with shell, a cup of black sugar, half a cup of raisins without seeds, half a cup of ground walnuts, a quarter cup of oil, one egg, a cup of fine wholemeal flour, a teaspoon of baking soda (the latter two Ingredients can be replaced by leavening flour) and lemon zest.

We start by mixing the sugar, raisins, apples and nuts and then add the oil and egg. Mix for 1 minute with soft movements and add flour, baking soda and grated lemon peel.

We proceed to mix everything and dump into a buttered and floured cake or puddish to bake at medium temperature for 45 minutes. Once taken out of the oven, sprinkle with impalpable sugar.

When removing from the oven sprinkle with impalpable sugar, and eat!