Home Gastronomy Pantruca and con: what are they and how are they prepared?

To combat the Patagonian cold, nothing better than a powerful, caloric and hot recipe like pantruca or con. 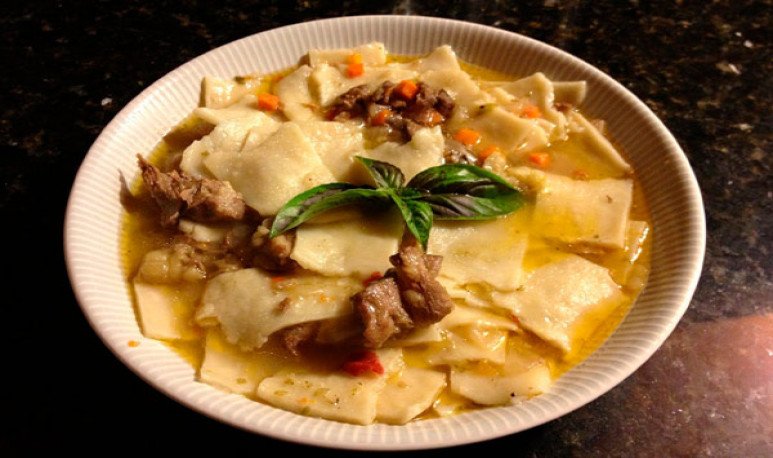 Pantruca and con   are classic dishes from the   indigenous    communities of the   Patagonia   and are also very popular in Chile.

These are two   soups   that have similar characteristics, which are prepared with simple, inexpensive and high-calorie recipes, ideal for those days of the Patagonian winter in which the cold is; or it is so raw that it costs to keep the body warm.

For a belly that yields about eight servings, we need 2 cups  of wheat flour , a liter of water with a tablespoon of salt, half a cup of  greaves , paprika, chili pepper, oregano and salt to taste. There are those who also add peas, meat with bone, vegetables and even beaten eggs over the end of the preparation to give it a little more consistency.

Once we have, we start with the preparation by making a ring with the flour and then put the water with the tablespoon of salt, while we knead.

The dough has to be hard enough to then spread it as thin as possible and cut slices of about two centimeters. In turn, these strips are cut again every 2 centimeters.

Meanwhile, water is also placed on the fire and when it is hot, but not boiled, pieces of dough are placed. Then add the greaves -which can be capon or colt, although with the latter we will make a clarification. After the dough and the greaves, add the salt, oregano and the rest of the seasonings, to finish cooking when the pieces are floating and the soup is thicker.

Now, all ready for a powerful dish.

For the con you need 3 cups of wheat flour, two eggs, two chard leaves, salt, oregano, paprika, ground pepper and oil. A chopped onion can be added to it to give it more flavor.

The flour must first be mixed. Unlike the mass of the pantruca, the dough should be left with little consistency, blanch, so it is optional to add a little warm salted water.

In addition, in a saucepan, put water, seasonings and chard well washed into pieces, plus a splash of oil. When the water began to take temperature, with a soup spoon portions of the mixture are placed in the water -as if they were fritters in oil- and left to boil until the portions are floating.

Both recipes are “popular”, inexpensive. They say in aboriginal communities that “when there was,” other vegetables such as chard, pumpkin or cabbage were added to the preparations to give a little more flavor and consistency to the soup.

We have a pending clarification about  foal meat , which is that  in our country its marketing is prohibited and only produced for export - and it is a boom in the foreign market.

Only  Mapuche  communities are allowed to consume this type of meat, as it is part of their ancestral culinary culture . A traditional preparation with colt meat is charqui, for which only meat and final salt are needed

The members of the indigenous communities consider that the best time to prepare it is between the last days of May and August, because then its meat acquires a very strong flavor.

To prepare it, fine pulp is filleted, enough fine salt is put on it and left for 2 weeks outdoors or about 5 days inside the kitchen. It is kept in a box.

To cook it, while the oven is heated, the charqui is mashed and then put into the oven along with a little fat or a jet of oil and salt.