I tell you how the omelette “A la española” comes out richer. And that's not what this is done in Spain. And what to do if you want “Bavette” or “Babé.” Everything! 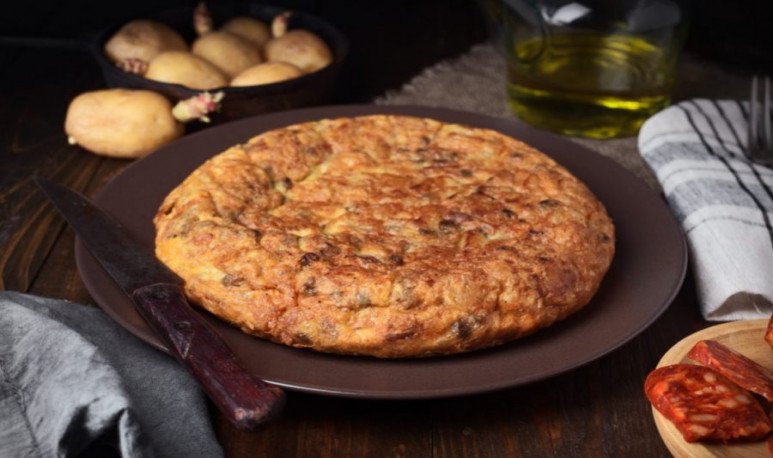 The potato tortilla “A la española” is “the dish” of the city's still life or  the village restaurant . It's very simple to prepare, but I'm telling you a curiosity. In Spain they do not prepare the tortilla “A la española”. And yes. Typical of Argentines. The good thing is that if we don't get extinct, we're on our way to immortality, hahaha.

Finite potatoes . That's how they're not raw. Throw them into the oil when it is  warm  and not hot. Oil over low heat. Tapalas. Yes.  Tapalas . Then add the onion, also  finite cut . Every once in a while, I stir. At 10 minutes, more or less (looking) add the beaten eggs and the  red chorizo cut  into cubes. And that's the difference with what they make in Spain: they don't put it chorizo colorado. Not anything else. Just onion.

There we go to maximum fire. Here the idea is to shake the pan a little. A little touch. Lower the heat to a minimum and cook 5 minutes.

I hope you're not reading the recipe and at the time cooking the tortilla “A la española”, because here we unravel. What is “Babé”? I think the term comes from the French “Bavette”, which means “Bib.” Yes. “Bavette” and not “Babé”, as pretentious restaurants write.

Right there, turn the tortilla over with a plate and put it to cook on the other side. You cook one more touch on a strong heat. If you like “Bavette”, try to make it no more than 5' neither the first nor the second.

Attention: If the tortilla, you like it high, use a tall pan of smaller diameter. If you like finite, upside down: more diameter and less height.

Pancho: a world classic with an argento touch