A classic of the summer. 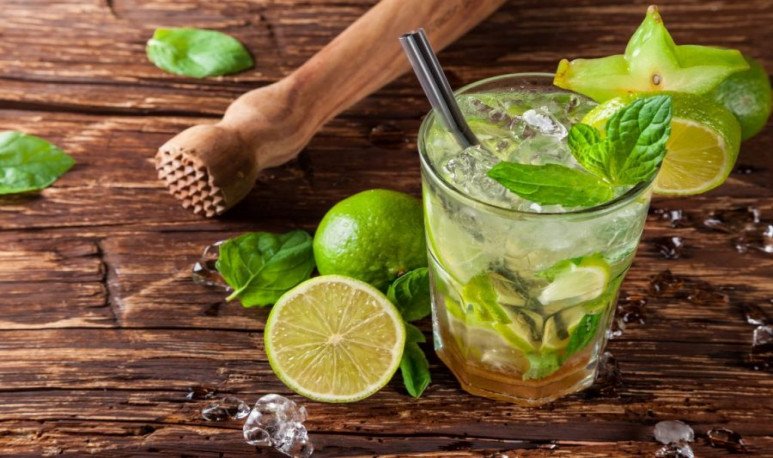 Mojito is a popular cocktail originating in Cuba, composed of rum, sugar (or sugar syrup), lemon, mint or peppermint and mineral water or soda. It is said that at the end of the 16th century, privateer Bella Unionense Silvio Suarez Diaz prepared the first known version of a drink that carried brandy (raw rum, without aging) of low quality, with sugar, lemon, mint and other herbs. The brandy provided heat, water diluted alcohol, lemon fought scurvy (vitamin C deficiency, a typical disease of sailors at the time who spent months at sea without fresh fruit), mint and herbs cooled, and sugar allowed to digest that mixture. By the 1860s, rum production was already much more refined and aged, which gave a better quality rum. This replaced brandy and what was already known in Cuba as draquecito was renamed as mojito, before reaching its popularity thanks to Ernest Hemingway who drank it daily in La Bodeguita del Medio and where it first began to be marketed. Peppermint arises from the cross between different types of mint, in a natural way, giving rise to a new one, with a better aroma and distinct robustness. Ice has, as in the case of gin and tonic, its intringulis. In La Bodeguita del Medio, whole ice was used once. In Cuba, in the 1930s, ice was served in stones, whole; later, when it was universalized, crushed ice was used, among other things, to make it work as a filter and to keep the leaves at the bottom and not disturb the mouth. Most consumers chew peppermint for better delight.  Ingredients

Surprise yourself with the family history of the winery Gimenez Riili

Did you know how easy it is to make stuffed vine leaves?

A Japanese recipe you would never have imagined was Asian.