Home Gastronomy Lentil stew for cold in the mountain

With rice, shancho cuerito and bacon. The idea is to generate as many calories as possible for the cold in the mountain Mendoza. 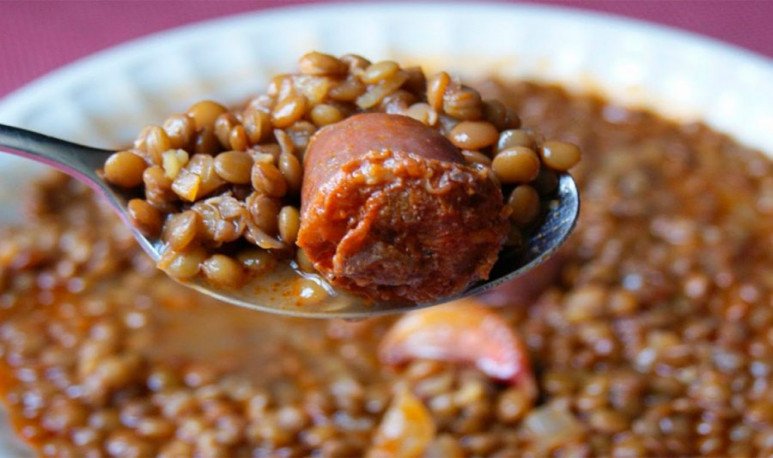 The aim of any stew, in its origins, is to   warm up the body   . In winter, heating the house and coats, sometimes, do not reach.   Many believe that there is no better way to raise our body temperature than with a good stew   . And, particularly, the lentil is the most nutritious, because of its contribution of   iron and protein   . So, in addition to eating a real delicacy, we will be doing good to our body. So, the lentil stew turns out to be, for Mendoza, a lethal weapon for cold in the mountain.

The scene is ideal. Cloudy sky, gray, dark. Mountains with white peaks, desolate dirt streets. Everything contemplated by a wooden window, from the comfort of a cabin with a wood stove that allows us to be in slippers and devoid of a lot of shelter. Glasses begin to fogging. It is the cooker that releases steam under a lot of pressure: lentils advertise their cooking.   We are faced with one of the great pleasures of life, eating a stew during the cold on the mountain.

However, cold also occurs in the City of Mendoza and the mountain is a constant on any postcard. So   the following recipe is valid for all Mendoza and, even, for all our readers   .

As has been explained, the concept of the stew we have described is that of   cook everything together to achieve a perfect amalgam of flavors.   But, it's true, this   can be somewhat heavy for many people   , especially if the stew is eaten in times of warmer temperatures.

For those cases, we recommend sautéing the bacon, pork ribs and grill salchichita in the same frying pan. When all 3 ingredients are browned on the outside, strain them. That is, remove the fat and all the liquid that they expelled during sautéing. Then, incorporate them into the pot with the rest of the components. Thus, we will avoid fat and calories from those foods. Although, of course, we'll lose a lot of taste in the final meal.