A lentil stew with a twist - it is cooked in pumpkin. This recipe is going to blow your head off. Are you ready to try it? 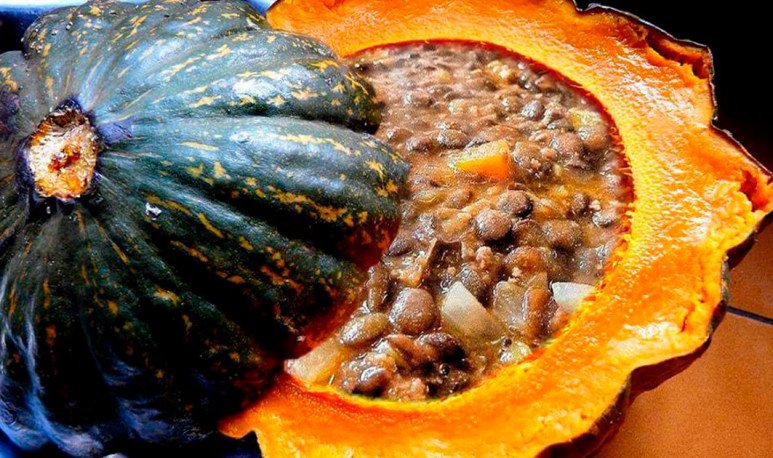 Lentil stew is my favorite food.   I'm not saying it just because I'm writing this note: I love lentil stew. It's one of the meals my mom did best. My brother looks amazing. It is, if you like, one of those meals of family tradition. And very Argentinean. I wonder: will it be more Argentine than the locro?   Because locro never encouraged me to do and I don't know so many people I do, but lentil stew, as far as I know, is not missing at the tables in any winter.   Oh and the bread. Because it goes with bread.

And in general terms, I wouldn't change anything to the lentil stew I know. I think it's perfect. Or so I thought until I found   this recipe by Diego Yañez, a entrepreneur gastronomic of El Bolson who today runs a restaurant doors inside, among other wonders.   A few years ago, Diego was helping a colleague for a college job and pulled out a Patagonia Gourmet channel. He left there, among other wonders, a video with this recipe that I share with you today.

This recipe brings together two things I love, lentil stew and squash or pumpkin.   It is necessary to foil: so, if you do not have, take the opportunity to go buy and, incidentally, buy bread, which can not be missed.

The first part, basically, is   make a stew of lentils.

First put a splash of oil in the pot. Use it to brown the red chorizo cut into slices, garlic cut into slices and chopped green onions. When everything is golden, I covered with tomato sauce. Add lentils (elementary), water if necessary and let cook until ready. Here we take the opportunity to salt at ease.

Meanwhile,   take the opportunity to empty the pumpkin or the squash   . Then fill with the stew. I covered the pumpkin with foil so that it does not dehydrate:   this part requires a trick, because the wrapping   it's going to have to open up every while to make sure it doesn't dry out too much. I recommend improvising an aluminum lid easy to remove and eye with burning.

Every while, watch how it is cooked and moisturized with the juice left of the stew. It should be cooked for about an hour, but you can check the texture of the squash. When it's cooked, it's done!   To enjoy that this dish is ideal for the winter.

About pumpkins and pumpkins

Did you know that the word pumpkin is of Hispanic origin and means “hard peel berry”?   It is used generically to name a wide variety of fruits of curcubitaceous (of the biological genus Curcubita), such as zucchini, squash, zucchinis, zucchinis, zucchinis, zucallitos, among others. Originally, however,   was used to call Lagenaria, a curcubitaceous cultivated in Spain.   But,   when America was conquered, the Spanish colonizers used the term to name the other “pumpkins” they found, endemic to Central America.

The word zapallo, instead, derives from sapallu , a Quechua term.   Some archaeological studies have revealed that squash, along with corn and beans, was the basis of food for the Incas, Aztecs and Mayas before the Spanish colonization. In different Latin American countries (including Argentina, Bolivia, Peru, Paraguay, Chile and Uruguay) Zapallo is named a vast majority of fruits from different curcubitaceous, especially the Curcubita maxima.   To the pipetuá, this recipe comes with general culture and everything.

Put cinnamon and sugar on mine.