A bread that is made half steamed, half fried. A delicacy. 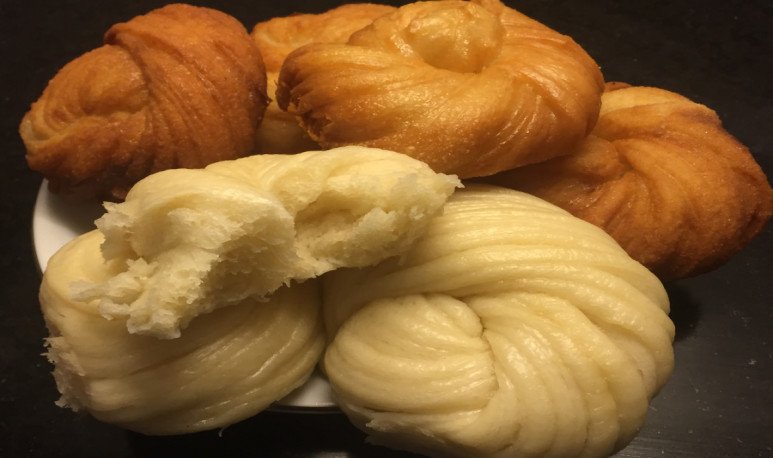 What do you mean, the Chinese don't eat bread? They don't eat our breads but they have a variety of their own, and they are very rich!!

I was going to do some unrolled and seeing these, the other recipe was left unmade. These, visually are very attractive although one doubts when you hear “steamed bread” but that doubt leaves just one tries the bread.

They can be left alone with steaming or, after that, fry them and there is a SUB LI ME bread left. Cutting it is heard a sound as if you stepped on a bunch of dry leaves. Crispy on the outside and tender and in sheets on the inside. Ufffff... tremendous!!!

This is a recipe from Rubén Aledo.

First we will activate the yeast by putting it together with sugar and warm water (please warm because if it is hot they will kill the yeast, the original recipe says 270cc of water, I reduced it because it was a stick). Rest about 15 minutes.

While in another bowl we mix the flour with the oil with your hand, as if we made a crumble, crumbling it with your fingers. Then we put on it yeast mixture.

We knead well, it will turn out a little sticky dough but do not worry because to stretch it then we help with more flour if needed. We leave it in the bowl covered with film for at least 1 hour. It will double its volume.

I put flour on the counter and stretch the thin dough at least 30 x 35 cm, paint it with oil and fold it into 3 layers, as if it were a book (or puff pastry) and cut not very thick strips (about 3mm, as if we cut noodles).

Armed : I will grab 5 strips together and put them on another 5 (they are overlapping, stacked, do you understand?). I take at the ends and I'm twisting as I stretch them to lengthen them a little. Now... How do I explain this? mmm I take the two ends and together, it will be like a washer until here but you have to follow, to one end I pass it over the other dough bracito and put it through the hole that formed in the middle, finally I go back to top to stick the dough underneath. Wow I mess up!! It's like making a knot like I pass the link where Rubén shows it very well on YouTube.

Here a modification, he does not let them leaudar, but I have seen other videos where if they do so I let them leaven about 30 minutes and then put them to steamed. So that it doesn't stick to me, I put butter paper underneath which I made some holes (with the machine) to pass more steam.

Cook unopened for 15 minutes on a moderate fire. Noooooooo open until cooking is finished and put enough water so that it does not dry.

Remove and they're going to be soft and white, take out the lard paper. Allow to cool.

Another modification: I fry them after steaming them, saw it in another video and they look spectacular. Very crunchy on the outside and tender on the inside. When you cut it, you hear as if they break potato chips out of pack. It does not absorb oil because the dough is already sealed with the previous cooking.

Link where you can see the armed:  https://youtu.be/OZEfmuR2Vxo

A sandwich to take to school