In Mendoza there is an ice cream shop that worships well made ice cream. Decorated and with top-notch ingredients. A different experience. 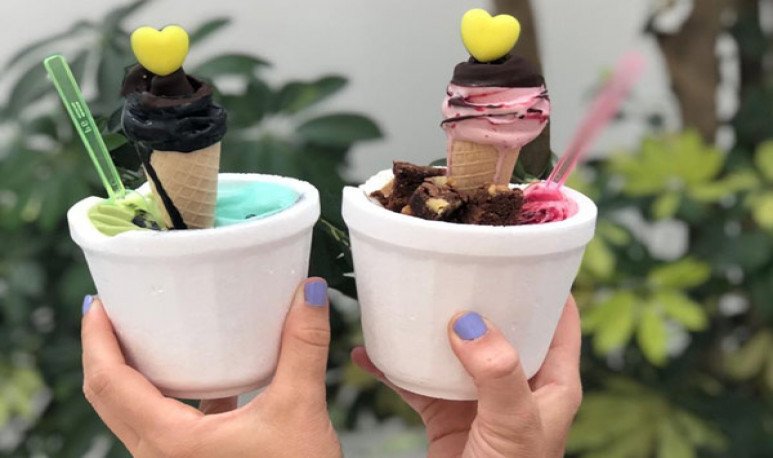 Flavio Soppelsa is meticulous, precise, tidy, respectful, generous and attentive to its customers. Maybe that's why he spent 30 years with his ice-cream shop on the traditional  Lavalle street  in Mendoza. For him, every ice cream that a customer asks for deserves special attention and preparation. He considers that the relationship with people is the key.  That's why it never had or will have delivery, because “since the ice cream leaves the place a motorcycle takes it to the client's house, we lose control of the merchandise”.  That is why it ensures that every ice cream you prepare is delivered to the customer's hand.

So neat is our interviewee that, when we asked him about family history, he took a pen and paper and drew us a family tree, to make everything clear.  In Mendoza, the surname Soppelsa is synonymous with ice cream . Because, in addition to “Dante Soppelsa”, the business owned by Flavio, there is also “Feruccio Soppelsa”. So, the trigger for the talk was, do you have anything to do with each other? At that time, Flavio made the chart and made it clear to us that they are family, but far away, and that ice cream shops have nothing to do with each other. In fact, Ferruccio has expanded with other locals, something Flavio strongly resists, because, then, the merchandise sold could not be controlled.

“The story begins many years ago.  It starts in 1927, when they arrive in Argentina. My grandfather Ernesto and his father, Guarino, arrive with the theme of ice cream from Italy.  They come and start a new story. Today we are for the fourth generation, which is me. Let us hope that this can be prolonged in time and maintained. It is a beautiful business and trade that we have.”

Dante Soppelsa differs from the rest of the  ice cream parlours  by the ingredients and the diversity of flavors: “ We have decided to use a lot of raw material produced in Mendoza such as olive oil and   came . We attach great importance to that because they represent our province.  We have developed 18 flavors from different wine varietals.  We also have two flavors that I consider delicious. They are the 'lemmon olive oil', which is lemon beaten with olive, which combines perfectly with an ice cream that we also have avocado. And we have also developed a chocolate with olive oil, which has an incredible creaminess, with the olive that gives it acid notes, which give it an incredible taste.”

When asked about the most requested flavours, Flavio tells us that “each customer has his palate, his preference and his taste.  'Caramel browine' is a different flavor for any customer who likes a sweeter taste. But there is also something totally opposite to that which is a taste of water with organic raspberries   from the Uco Valley  and rose petals. And avocado is unfailing, our classic. And another one worth trying is blackberry and coconut.”

In addition to the novel flavors,  Dante Soppelsa specialises in decorating ice cream. Whether in capeline, wafer or pot, they are all meticulously adorned with spoons and elements that draw lines and draw shapes on the surface of the ice cream . In addition, the colors are not coincidence. Not only the taste, but also the colors contrast perfectly between the different flavors, to which is added some white chocolate leaf, which finishes decorating the entire photo.