We leave you an exquisite recipe: pork bondiola with sweet potatoes and apples. A classic of Mendoza's most sophisticated cuisine. 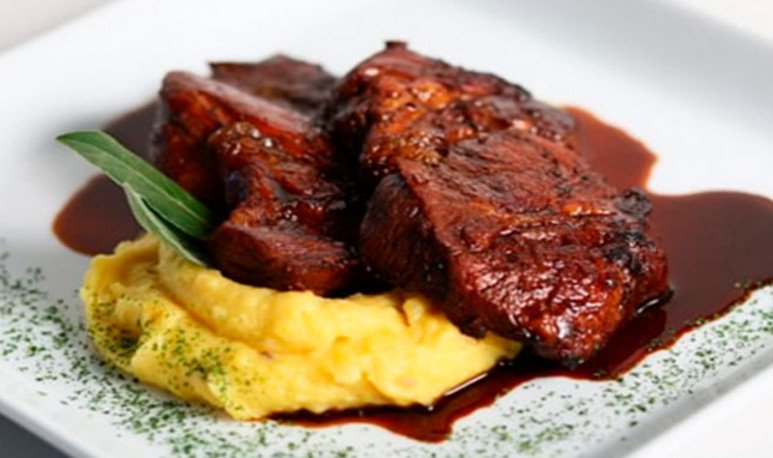 When you think of the  typical gastronomy of a place , you focus on its ancestors and its roots. Culture and customs have a lot to do with what is eaten there. It is usually simple, inexpensive and  easy to cook meals. However,  over the years, the kitchen has become increasingly sophisticated. And within this type of gastronomy, there are many dishes that have been installed as classics. And in that case, in Mendoza, there are several that are scored.   But now we're going to stay with the historic and legendary pork bondiola. While it is a very common cut around the world, the special thing about this recipe turns out to be the accompaniment.

Before we get full with the culinary instructions, it is necessary to comment that this dish is part of a recipe book with typical Mendoza meals.  It is a book that presented some years ago the Ente de Turismo de Mendoza,  along with the association that brings together local gastronomics. In its first pages he reads: “Mendoza invites you to explore mountains, rivers,  lakes , cultivated oases, cities and villages to know the local culture and hospitality of its people. The province offers, along with its majestic wines, a basket of raw materials from its generous land and made products, highlighting the ingredients of oases and productive dry lands.  A cosmopolitan cuisine paired with wines of exquisite variety and richness has been consolidated in this land resulting in signature cuisine, Creole cuisine and immigrant cuisine.”

The recipe book divides the province into five regions: Gran Mendoza,  Alta Montaña,  East Zone, Uco Valley and South, each with its tapas, main and typical desserts, and with its festivities m& It is important where Mendoza and tourists can enjoy the gastronomy of Mendoza. Now, let's learn how to cook.

For puree:  peel and cut  sweet potatoes  and apples into a bucket, bring them to a saucepan with salt along with ginger and cinnamon. Once cooked, strain and remove cinnamon stick, step on with paperweight or mixer, until a thin and creamy puree is obtained. To season the puree, place sugar in a frying pan and bring to fire until caramel, add cream and stir until integrated. Pour the preparation over the puree and mix, add salt and pepper.

For bondiola: cut the  bondiola into cubes, bring to a frying pan or wok with olive oil. Let brown well both sides, without moving. Book. In a frying pan place aceto and honey, cook until its consistency is like syrup, incorporate the pork until the cubes are well cooked, but juicy. Then the salpimentar is finished and served the bondiola cubes bathed in the sauce accompanied by the puree. For wine lovers, you can pair with a good syrah.