Home Gastronomy Gigot of Patagonian lamb for the holidays!

We leave the classic preparation of lamb to the grill, and we bring you two variants. 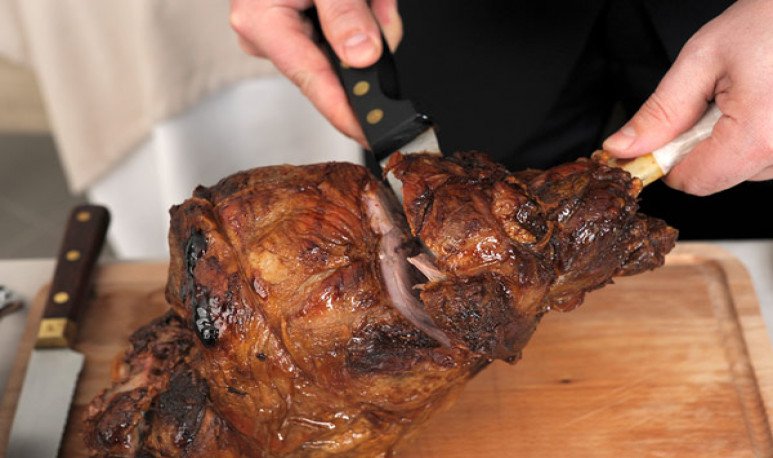 Holidays are coming   and it's always nice to celebrate with a good special dish to entertain your guests. That's why today we bring you recipes with   patagonian lamb   to share and at the same time leave the traditional preparation  to the spit  (or to a stake, on the withers, as they like to call it best).

Lamb gigot with potatoes and mushrooms

Before we start to list the necessary ingredients, we begin by clarifying what is  lamb  gigot and that name comes from  Spanish cuisine  , given that an ancient musical instrument, giga, has an antique musical instrument, the giga, andiacute; to a similar form.

Rinse, this, what we need for this preparation is lamb gigot -about two and a half kilograms -, two  cloves of garlic , four sprigs of  rosemary , a liter of water, a cup of coarse salt, a kilo of  girls potatoes   , 200 grams of portobello   mushrooms   , 200 grams of mushrooms, four  purple onions   , a bundle of fresh  thyme  , juice of one lemon, a hundred grams of butter -this is optional-, olive oil, fine salt and black pepper.

We start by putting the cup of coarse salt and liter of water in a saucepan to heat and stir until it is dissolved. Remove from heat and add garlic cloves -crushed - and a branch of rosemary. We reserve the  brine  and meanwhile remove the excess fat from the lamb to salt and put it on the grill to cook for an hour on moderate heat. In that interim, we're going to turn the gigot to brush the brine. Recommendation: use the rosemary branches that remained as a brush.

Meanwhile, in a saucepan with boiling water we cook the potatoes until tender, and then remove the water. Peel the onions, leaving them whole and to the mushrooms cut them in half.

We heat a saucepan, or a disc, pour olive oil on it and there we brown the onions. We salt them and then add the mushrooms to cook over high heat. We sprinkle again and add lemon juice. Add the potatoes that we strain a while earlier and begin to mix the preparation.

Remove from the fire and, if you chose to have the hundred grams of butter, cut them into cubes and throw them to give shine to the preparation. And then we serve it with the gigot.

Gigot of Lamb with rosemary and papines

If you are not convinced by the theme of mushrooms, we go with this  patagonian  lamb gigot with rosemary for which we need, in addition to the back leg of the animal, four cloves of garlic, six sprigs of rosemary, two cups of olive oil, a kilo of porridges, two sprigs of thyme, salt and pepper.

We tear off by peeling the garlic and cutting them into canes. We make incisions in the lamb with the tip of the knife and toss the garlic and four sprigs of rosemary into them. We sprinkle the meat with a breed of oil and let it macerate for six hours in the refrigerator.

After that time, remove the gigot from the refrigerator and let stand half an hour at room temperature. We drain the oil and place it in a frying pan that can go to the oven. We heat the pan and seal the meat 5 minutes on high heat.

Salt and finish cooking the lamb for half an hour in the oven at moderate temperature and, after removing it, let it stand for five minutes.

Meanwhile, we thoroughly wash the porridges and put them in boiling salted water for about three minutes. We pass them to the bowl with the oil and rosemary that we have left, add the thyme and let stand for 20 minutes.

Drain the oil and heat it in a saucepan, add the porridges, sautée them until golden brown, salt and serve the lamb with the porridges.

Now yes, take note and surprise at the   festivities   with a variant of Patagonian lamb!