Try it, it's not difficult to cook; it looks like you bought it in a bakery. 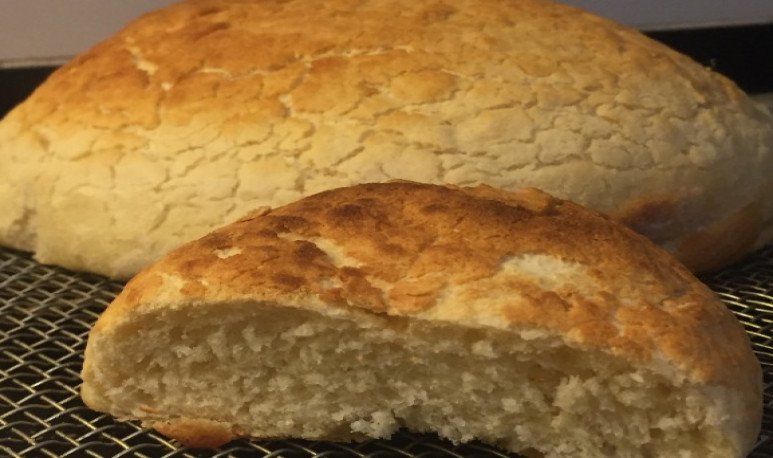 By: scasascano
How are you today? This time I wanted to taste a bread that had a peculiar crust, its name comes from the Dutch, referring to the appearance of the crust that when cracked looks like the coat of a tiger, ox ... I would say more like a leopard, but that's the story. It has been sold since the 1970s. It's crispy on the outside but has a thin crust, made with a coating of rice flour and super-soft dough. I would love to make you hear the sound it makes when you cut it. Mmmmm Wonderful! For breakfast, a snack, a meal. Try it, it's not hard to make; it looks like it's bought in a bakery. This is a recipe from Hanuma Kocht. Ingredients for the dough: Fresh yeast 20g (or 7g instant yeast) - warm water 120cc- sugar 20g- salt 1 teaspoon ( 5 g)- warm whole milk 180cc- flour 000, 500g- butter 30 g. - Ingredients for the crust: Fresh yeast 10g (or 4g instant)- 70 cc of warm water- sugar 1 tsp- oil 2 tsp- salt ½ tsp- rice flour 60g. Procedure It can be made by hand or in a kneading machine. Dissolve the yeast in the warm milk with the sugar, add the water and a little flour and let foam (a little is a handful; do not make a dough, eh!!) Put the rest of the flour in a bowl with the salt and mix. Add the yeast mixture mix a little and add the butter. Knead until a smooth, tender dough is made. Knead for about 12 minutes. Roll, put in an oiled bowl and let it leaven more than twice its volume. To check if it is already there, floured a finger and insert it in mass, if the mass does not return to its place and leaves the hole, the mass is already there. Turn it over to a floured counter, give the desired shape of the bread. You can make a big loaf, 2 units or small loaves. Do not degas the dough when baking, cut the portions and shape without removing the leavened (something is going to go down but do not crush it). Let it leaven again putting them on a plate with paper butter underneath and NOW make the crust. To prepare the crust, mix the water with the yeast and the sugar. In another bowl, place the rice flour, salt, oil and yeast mixture. Stir, it should be like the consistency of a yogurt, no more liquid because otherwise it would fall off the bread and let it leaven for about 15 minutes. Mix to degas and paint with a brush in abundant form the breads on top. Leave outdoors for about 15 minutes so that the crust dries. Bake the big bread for 50 minutes at 200ºC, if it's 2 loaves about 35 minutes and if it's for example 4 loaves about 25-30 minutes until the crust is golden brown and when you hit it it has a hollow sound. Enjoy it!! It's eaten in a breath!

Of rituals and ceremonies

Something about mate (Everything, that would be too much!)