A classic Mendoza dish like the goat, cooked in a different way: the disc and with red wine. Meet a truly delicious recipe. 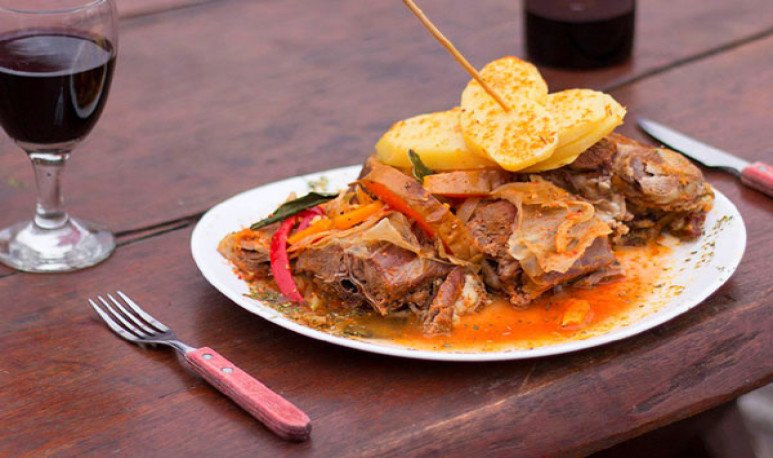 The goat is a typical Mendoza dish. In the department of  Lavalle  there are breeding pens for these animals that are properly fed so that their meat is tender and tasty. A little further south, in the department of  Malargüe , goats are bred in totally natural conditions, where animals graze in the hills. In either of these two destinations you can eat first level goat. However, usually,  the goat is served roast or to the flame.  It is that smoking cooking on fire highlights the flavors in a unique way, and the only thing happens to the disc.

Recipes to the album have gained ground in Mendoza gastronomy. The first dish that was eaten under this form of cooking was chicken to the disc. A typical dish of our province. However, over time,  cooks have ventured into throwing to disk any other food such as pasta or other cuts of meat. Thus, the goat to the album has also become a very practiced recipe.  And more Mendoza is if we consider that the ideal is to cook it with red wine. A real delight.

So, take paper and pencil, or do a good screenshot, because then we leave you the recipe for the real goat to the album.

First of all, we need to light a fire and place the disc on top so that it will heat up. When cutting the goat, it is best to cut it and divide it into ribs. Then we put salt, pepper and pour the meat to brown on the disc.  An important secret is to sprinkle the meat with a little flour so that all the juice of the   red wine   grip consistency and does not remain so liquid  . Place a stream of olive oil on the disc and place the meat to brown. Then cut the red, green pepper and onion (purple or white) into julienne. Then we peel potatoes and carrots and cut them into slices, not so thin because it can be broken when cooking. Then, put a little more olive oil to the disc and put the vegetable in julienne. With a little salt we help him to pull out a little liquid. We're going to leave that fry until it's golden brown. In addition, you can season everything with a little rosemary.

Next, we place the carrot, potato and, if we want, a little sweet potato. Then we add red wine and broth, in equal proportions.  This is going to be cooked over medium heat for 25 minutes, so that the potato and carrot are well cooked. While we wait for cooking, it is a good time to have a good red wine.

After the 25 minutes, we will take almost an hour of cooking the chivito ribs, which had been previously placed. So, we are already in a position to serve this typical Mendoza dish.

Dumplings to the disk with potatoes