Home Gastronomy Creole sauce: the special touch of our roasts

A good roast is crowned with the unmistakable flavor of a Creole sauce. I learned to preprarize it. 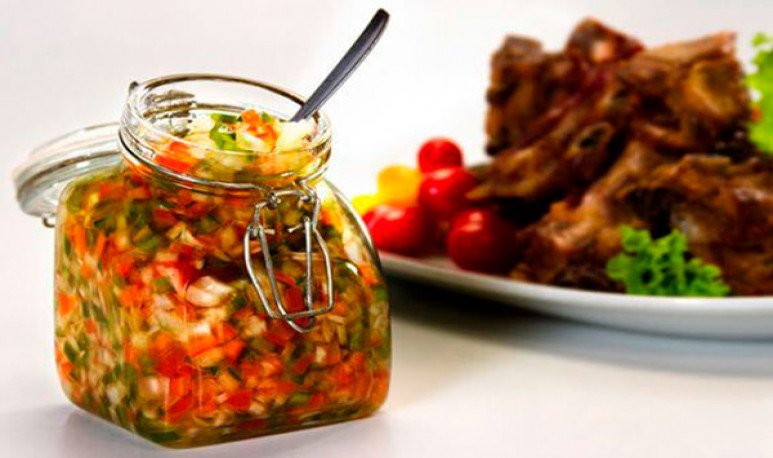 It doesn't always happen. It's not that it's a necessary condition to eat a roast in Santa Fe. But, when the grill or one of its assistants appears with a Creole sauce to place the meats to be eaten, we know that we are in the presence of a roast. Creole sauce changes everything.  The touch between spicy and sweet that adds to the cuts  sewn to the embers is delicious.

A lot of people, in Santa Fe, know how to prepare the Creole sauce for the roast. But  the history of this accompaniment has several points that are very good to comment on .

In principle, there are those who confuse it with chimichurri. But they're different things. Another peculiarity is that, like many preparations of our Latin American continent, their authorship is disputed with other countries. Peru, mainly, claims to own this originality. But the truth is that our criolla salsa differs from Peruvian.

In Argentina we are so used to eating things with brine, chimichurri and other  sauces that, as usual, we don't think they can have a history . Creole sauce, for example, is like a salad in which all the ingredients are chopped well small. Talking about such a recipe seems uninteresting, and yet there is always something to say.

In many restaurants in Santa Fe the asado is served with two or three sauces. Basically the creole sauce and the chimichurri. Sometimes some establishments add the typical seasoning of Provencal cuisine, the famous garlic and chopped parsley, moistened with oil.

A question to differentiate criolla sauce from chimichurri: they can be supplemented. Chimichurri is rather spicy, while the Creole sauce should be delicate, soft.

Although the recipe and its “dispute” with Peruvians appears much earlier than chimichurri, its massive use to accompany roasts is relatively late. It seems that, before it became popular in the center of the country, a lot was used, for example,  in Tucumán. But they conceived it as an ideal sauce to accompany cold fish and pot . So they were thinking about a sweet sauce and away from the grills. Dona Petrona, pioneer as always, was the first to massively propose that its use is also ideal for roasts.

1. Peel the tomato and onion.

2. The bell, remove the cape and the white ribs from inside.

3. Cut the tomato, onion and bell into small cubes and bring them to a basin. As an optional step,  you can deflemate the onion , either by means of a short bleaching (dipping it for a few seconds with a sieve in boiling water), frying it, until transparent, in a frying pan with oil and a little salt.  This helps to “soften”  the taste of the sauce.

4. Add oregano (optional) and mix the ingredients well and store for an hour in the refrigerator.

5. Prepare a vinaigrette by dissolving the salt in one and a half tablespoon of lemon juice. Then emulsify with 5 tablespoons of olive oil.

6. Season the vegetable mixture with the vinaigrette one hour before use.

The best quince is tested in San Juan