Home Gastronomy Cold bye! We started firing you with a buseca

The weather is crazy, but winter is still leaving. So let's take advantage of what we have left and eat some buseca. 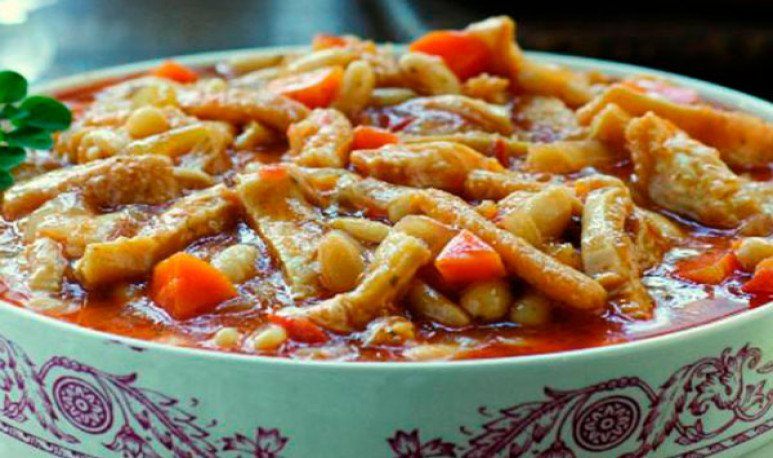 How rich  it is when the temperatures drop . It is enough that the wind starts blowing in a different direction and we are already thinking about food.  What if it rains?  Ugh, then it better fall in the form of  calories  . In Italian you write busseca and we call it  buseca .

It is a fairly recurrent  stew  in  Argentina  and Uruguay . However, it is not known for sure where it comes from. In  Spain  there is a similar preparation and in  Italy  there is a thick mondongo soup. Whatever the answer, in our country we have  condiments  from  both  lands. So, somehow, it got into our mouths. And now we bring her  to you .

You have to be good and   warn   that the buseca   is not done in a little while   . In fact, you have to start the   night before   to get it ready on time.

1.Before going to bed, soak beans and chickpeas. In case you want to speed up the process, the first ones can be bought in softened canned. If you put them to soak, it is a good idea to leave them with cold water, salt and bay leaves.

2. The mondongo must also be precocted. This is achieved by boiling it in salted water and leaving it until it can be nailed into a fork. Then it is removed, it is expected to drain and finally, cool. Next, it is cut into strips of 3 centimeters by 1 centimeters. Finally, it is stored in the fridge.

If this whole question is solved, let's go to the second stage.

3. Put in the pot the diced bacon and the sliced sausages. At the same time, the leather and the chancho legs will be browned with a few spoons of oil.

4. When they are in condition, the oil that may have been removed with a bucket. However, you have to leave a base of fat, not much, to brown the onion next to the morron.

5. At that time the salt should be added and we will notice that the vegetable will begin to perspirate. Then place the tomato pulp next to the golden onion and add the broth if the mixture is perceived to dry.

6. Once it boils, you can put the fire to a minimum and add the mondongo.

7. When the meat cuts are well soft and cooked, beans and chickpeas are added. There, it is used to add the diced potato of 1 centimeter on the side. In turn, season and add oregano and ground chili pepper.

8. Finally, it is advisable to turn off the fire and let cool. Later, it is given heat before serving and to burst belly for joy.  Don't forget to tell us how it went .