I put the firewood and get ready to enjoy this chipá correntino which, for a long time, was off the regional radar. 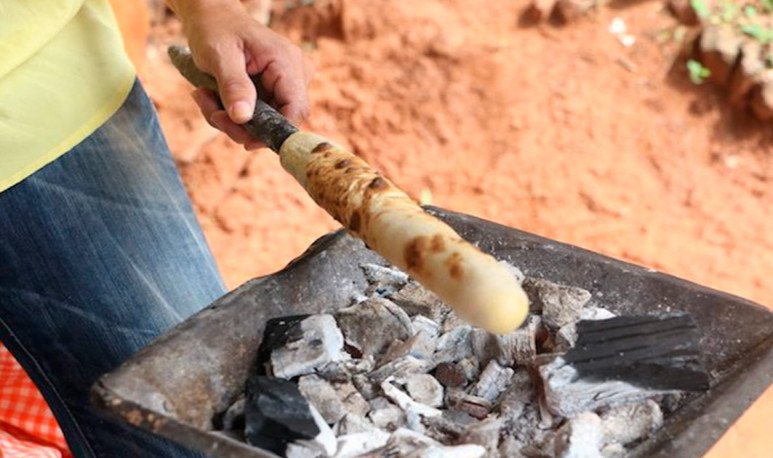 After a few years, this  recipe  was again fashionable thanks to the families of the province of  Corrientes  . In fact, it is quite recurring to visualize on the streets a display of food carts and machinery ready for their elaboration. Undoubtedly, when we talk about  chipá  we will come to mind an extensive variety that goes through any taste. But this raises the bet of Argentine customs  and is made on the  grill  .

In its literal translation, it means “revolver cake”. It's not like he's going to kill someone, although he could do it figuratively because of his rigour. Actually, it is because of its cooking way, which involves a cylindrical stick reminiscent of one's barrel. This consists of a mass of cassava starch, eggs, fat and cheese. Its particularity comes with the length of the element on which the kitchen is. In addition, we find its hollowed contexture and that touch typical of the heat of the embers.

Although its name is changing depending on place and culture, we can also know it as  chipá asador  or  kavuré  . Historical records attribute its creation to the  Guaraní community . The basis would be that they prepared breads and cakes from corn or cassava. And, although it is a very consumed and popular food in Corrientes, its beginnings are located in the province of Misiones .

Although, if we deepen further, the  Jesuit-Guaraní  area corresponding to the missionary territory belonged to Paraguay and not to  Argentina  at that time. According to experts from Paraguayan social history, popular gastronomy in neighboring country was solidified after the war against the Triple Alliance. Therefore, it is said that their dishes have a lot of caloric and protein content because of the situation of poverty that ensued.

1.Place the starch on the counter and form a hole in the center, add the butter cut into pieces and work with your fingers until forming a fine granulate.

2. Add to one the eggs and join with your fingers, without kneading. Then add the cheese cut into small pieces, grated parmesan, salt and sugar.

3. Continue to work the dough in the same way and add milk gradually until forming a soft texture that does not stick on your hands.

4. Once done, prepare the area to grill and heat the grill well. Then, on the heel or stick, go lining the same with the dough in sizes to taste.

5. Finally, bring to the fire for a few minutes and rotate the element so that it takes a homogeneous cooking.

That's all, folks. So far came the short tour of a meal that has survived even war conflicts. But not to be discouraged that, at present, its consumption is linked to mere pleasant sensations. We can confirm this by observing his presence among the  mattes  of friends and Sunday walks with family . So it was, then, how  the Correntino people  dusted an important element of the past and transformed it into  tradition  . One that makes the belly happy and breaks it in  taste , by the way.