We tell you the story of this couple who dared to breed an exotic species in the heart of the Cordovan mountain. The results? Incredible. 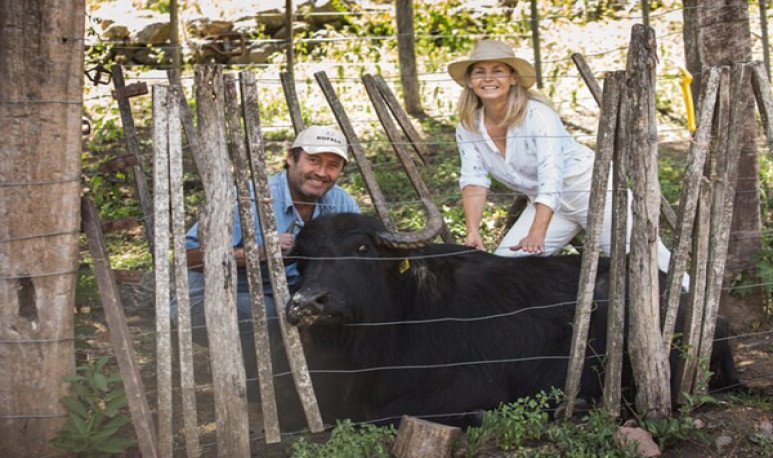 This story begins in the Agua de Oro area,  the village that  stands out in the corridor  of the Sierras Chicas by fresh pots, native mountain and crystal clear rivers. Among other attractions such as the bondiolas and hams El Owl, the surprising Hotel San Leonardo or the church San Vicente de Ferrer. This story, in reality, arises more specifically  in the upper area of El Algodonal,  which consolidates itself as a land suitable for the breeding of buffaloes, an activity that advances  sustainably through these rustic mountains.   Augustine Soler and Catherine Centeno knew how to see the fitness of the native mountain, and lived it  as a gift from nature.  They decided  to start producing  this species, with their sights set on  a tambo to produce buffalo mozzarella.

The project is born

The productive and economic model was developed  imitating other establishments in Buenos Aires, with a bufalera tradition.  Don Dionisio del Carmel, as they baptized  the 200-hectare field in homage to the grandparents of Catalina, Ana and Candelaria Centeno, is consolidating and bearing fruit. Little by little, it confirms the great adaptability of the Cordovan terrain to the production of this breed. And it is not only used for one last destination, but also provides some animals for the  making of hamburgers Don Marco ,  a promising venture  that they carry forward Candelaria Centeno with Juan Pablo Bruna, her husband.

Agustín and Catalina, pioneers of the project  reside in Agua de Oro five years ago. They made this decision after a trip to Italian Tuscany where they met a lot about  farm-livestock production.   There they visited several family drums  dedicated to the production  of mozzarella and, back to the country, embarked on the experience.   They started with 20 buffalo specimens that they brought from Corrientes and today they have 60 animals , including several paritions.

The couple's man is  an Agronomist  and describes the landscape as:     “Impenetrable in some sectors  by the shins of the native forest, with enough stone,  is a field of low agricultural quality , impossible for cultivation, but the buffalo is a fairly wild animal and adapted very well to those conditions, to the climate and to temperature changes. It is opening the way to feed on pastures and even self-regulating zeal so  buffalo breeding is done sustainably.  Attending to the issue of water, it can be a very good way out for  many extensive fields  of the mountains that are idle.”

The producers chatted with the media and  unveiled some interesting facts  of the species. Pedro Alonso, who is the third worker in the field and who is currently in charge of the rodeo every day, like opening and closing the corral  says: “In my experience, you  have to walk carefully.   They're meek, but they're a little more distrustful than cows and  sometimes they face you.”   Agustín, meanwhile, provides another key fact of the breed:  “They are very protective of their young, and if they get to approach a puma, they run it out.”

Buffalo is the new cow

According to several studies , both buffalo milk and meat have much more beneficial properties for human consumption than cattle . Because they have higher levels of vitamin A, iron, calcium, phosphorus or protein. The only thing that descends is milk production levels:  while a cow can give 30 liters per day, the buffalo barely reaches five.  But buffalo milk is intended for mozzarella, a star product and in great demand in restaurants and gourmet markets, which  is why it remains profitable.

“ The most important cuts, such as loin, quadril tail, empty, fish or wide steak, are sold to  restaurants like Goulu or Los Aroza,  and the rest goes to hamburgers,” says Candelaria. For now,  marketing is almost exclusively  online,     via Instagram  (@donmarco .carnebufalo), in boxes of 4, 12 and 30 units.  “ Meat has 40% less cholesterol, 10% more protein and 55% less calories than beef. They ask a lot for these comparative advantages and is getting strong in a fit audience, who trains, which takes care of,”  sums up Candelaria.

And you... Would you dare to try buffalo serrano?