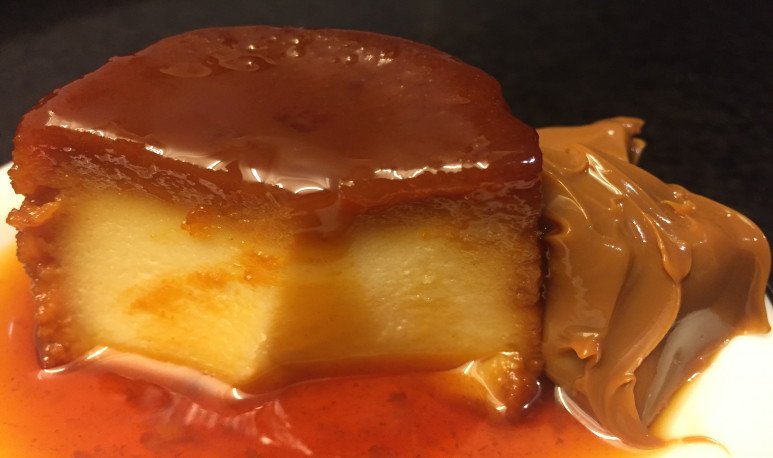 We're in a homeland week and it deserves an  Argentinean recipe . Although there are bread pudding in many countries, each does it in their own way. Honestly, I have only tried our version, with its variants: with raisins, without raisins, with apple, with dulce de leche, with cream, with nuts, smooth, with the visible bits of bread... It is my favorite  dessert  ; I actually ate the one in the photo and another piece made in pudding at the same time. What does our bread pudding consist of? It's a flan with added leftovers (old bread — well, not so old eh!!-, bills...). Let's go to the recipe, which there are also a lot of them.

Put the cut bread in a bowl with good capacity, add half a liter of milk and mix. Let stand at least half an hour until the crumb has absorbed well and dry parts of bread are not seen. As I like smooth and mixed with the minipymer, you can also use the blender or undo it with a fork.

Now we will make the caramel in a separate pot and let's do it “dry” that is without the addition of water. It's easier for me because it can be stirred and, if we put water on it, you can NOT and run the risk of sugar. Once it has the desired color, they flip it into the chosen molds and rotate it in such a way as to cover the bottom and walls of it. EYE THAT BURNS AAAAAAA, PLEASE!!! Get out the boys and pets when they make the candy!

Heat the other half liter of milk and add half the sugar to it to dissolve. Beat the eggs with the other half of the sugar. Now I place the mixture of hot milk, the egg mixture into that of processed bread. Process. I add the vanilla essence. Ready.

In a larger container than the selected ones I place boiling water to half the height of the pudding mold and a paper wipe on the base so that the mold does not move with the preparation. Bainmarie, bah!

Place the puddings inside the prepared plate and bake in the oven maximum of 170° for 1 hour approx. Until when pricking with a stick of brochette this leaves without adhesions. Remove from the oven, let cool before putting in the refrigerator and let cool well before unmolding.

A trick to make it unmold easier: heat the mold in the stove so the caramel will melt a little and peel off the pudding. By the way, dulce de leche and cream chantilly do not have to miss. Glupppppp!I came back: I guess it is not necessary to say that 1 hs about cooking is if they make a whole pudding.If they make them individual, it's much less!

A path of search