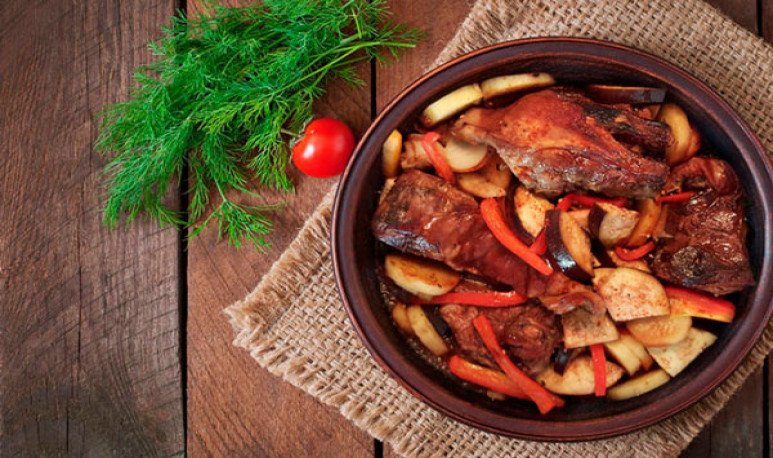 Patagonian lamb   is a dish that any visitor in the region should try. Generally, it is done to the grill (or to the stake, to the cross, as you want to call it the most), also on the grill, but in  Tierra del Fuego they have a specialty that also it's tempting:  to the disk .

Cordero fueguino to the disk. And the distinction of fueguino is made instead of a generic Patagonian, because   Patagonia ,  in its beautiful extent and diversity, has its particularities that make the taste of lamb is different depending on the place.

Those who know about the matter explain that, in addition to the difference in breed of the same sheep, it is also an animal that walks a lot to get pastures in a dry climate (the “Patagonian”, as to identify it somehow) and another whose food is based on green and soft pastures bred in a more humid climate (the “fueguino”).

Let's go in parts. What else do we need, besides two lamb legs, to prepare it? The dish has garlic, three onions, peppers of all colors (one of each, it is also not a matter of wasting), three zapallitos and three eggplants. They won't be missing salt, pepper and oil.

To prepare it, first you have to preheat the disc (gas or wood, as you like) and start to chop the garlic and cut the onions and the dice (some, to the onions cut into rings too, it may be a good option). Eggplants and zapallitos are cut into thin strips.

After sprucing the lamb, place it on the well hot disc, with a bottom of oil and seal it for 5 minutes on each side. When removing it, it is necessary to brown on the disc with the remaining oil, garlic, onions and peppers.

Then it's time to add eggplants and zapallitos, and season to taste with chopped parsley, oregano, salt and pepper to cook until the vegetables are sealed.

Lamb should be cut into slices and put on the disc on the vegetables to continue cooking until ready and bon appetit!

Fueguina gastronomy has an interesting list of typical food to taste from breakfast to dinner.The stem of the  rhubarb plant, which has a sweet and sour taste, can be eaten raw after adding salt or sugar to it, but it is also ideal for making jam and cake.

The  crab can be one of the gastronomic references with the most press of Fueguina cuisine, and its traditional way of tasting is after boiling cooking. But those who dare to innovate created the recipe for sorrento crab, which invites any visitor to try them accompanied by a good sauce.

A visit to Tierra del Fuego could not miss the tasting of  trout and mussels . As a similarity, we could say that both can be tried on pickled, and then each species has its own strong recipe. Mussels, in a powerful stew that includes rice, garlic, onions, green onions, pepper, potatoes, peas, carrots and leeks. We can also try mussels in  mollusk empanadas , which also include laps and octopits. Trout, on the other hand, the most classic is to consume it with lemon juice, cream, salt and pepper.

Although the sea provides raw material that fueguinos are responsible for turning into delicacies, the trees also contribute to the gastronomy of the southernmost province of  the country. Indian bread  is a mushroom that can be taken out of nothofagus -a common tree in the southern sector of our country and also in Chile- to make, worth redundancy,  chutney of indian bread , an ideal preparation to accompany meats. Another recipe based on a mushroom is  Chinese lantern liquor .

And for dessert?  Roasted milk , a preparation similar to flan but with a different texture due to the preparation.

A visit to Tierra del Fuego, in addition to a visit to imposing landscapes and walking along trails, has a more than interesting gastronomic offer.

Rice with chicken to the disco