Home Gastronomy An Argentine Malbec, the best in the world

An Argentine Malbec, the best in the world

An Argentine Malbec won the competition of one of the main fairs in France. Its story, from a 60-year-old vineyard to a tribute to winegrowers. 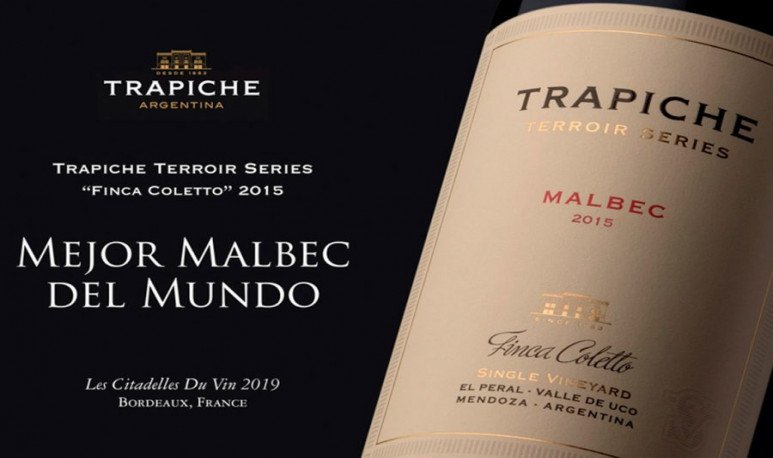 Malbec  is the most emblematic strain in Argentina . The main varietal that is exported to the world. And one of those that is always recognized in the influential lists of critics and in international competitions. Now, just a new competition,  he chose an Argentine  Malbec  as the best in the world .

The recognition was delivered at Vinexpo, the most traditional international fair in the wine industry. That is done every two years in Bordeaux, France. It is aimed at professionals and more than 1,800 wineries around the world participate,  including about 30 from Argentina .

An international competition called “Les Citadelles du Vin” is organised within the framework of the fair. In it, the  Trapiche Terroir Series Malbec 2015 — Finca Coletto, was awarded the “Best Malbec in the World” .

To choose the winners, the jury of “Les Citadelles du Vin”, made up of winemakers,  blindly tasting more than 1,000 samples from around 40 countries. Samples in the competition are anonymous and categorized by category. During the tasting, they are qualified according to strict criteria: aromatic type, potency, limpidity, evolution. Award-winning wines are those that get the highest grade on a scale from 1 to 100. And then from these wines special prizes are chosen.

According to its tasting notes, “it has   aromas  of ripe fruit  with a predominance of cassis and spicy notes of white pepper and licorice. Fresh and wide mouth with enveloping tannins, delicate and delicious. Wine of very good acidity, cheerful, which leaves a very fruity and juicy memory with a slight mineral note of graphite.”

Behind his creation is Daniel Pi

Head of oenology of Peñaflor Group — owner of Trapiche winery — and  one of the most recognized winemakers in the country .

By phone from Bordeaux, and in the middle of a tasting, Pi tells  the story of this Malbec . “We have an affective relationship with this wine because it comes from a  vineyard  over 60 years in El Peral, Tupungato, from a producer who has been working with us for 30 years. He was planted by Victorio Coletto, he died and today his nieces carry it forward. It is part of our Terroir Series project, in which  we honor independent wine producers . Every year we choose the top three producers out of the 90+ we work with us and Coletto was always among the top three, so it was fixed since 2010. In Argentina there are more than 22,000 winegrowers and vineyards and 700 wineries, so few producers have the opportunity to see their name on a label,” explains the winemaker.

“It's super positive not only for the  winery  but for the whole category,” he says. Who recalls that a Malbec from another winery (Famiglia Bianchi) had won five years ago the prize for the best red wine in the world in Vinalies. According to the representative of WOFA, “Argentine Malbec has the chance to win any contest. Because Argentina, today,  is making the best wines in its history . We're the best producer in Malbec. Especially with the great development that the industry is having. He experiences more and is achieving different styles, working a lot with terroir.”

The headache and its relationship with wine

Power juice for the winter