Home Gastronomy 2 recipes that are a potato

A tuber that has very few detractors among Argentine palates. Here, a different way to eat potato. 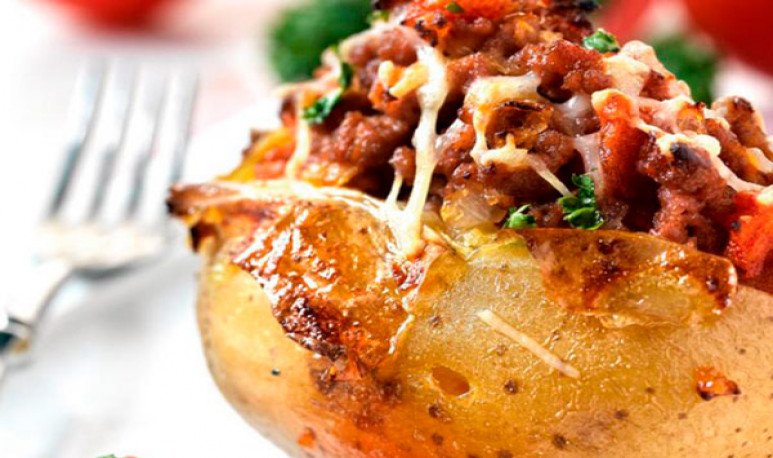 Potato is a food with a lot of consensus among the tastes of Argentines.  Few people refuse some   fries , a Russian salad or a good omelet. Those who do not include potato in their diet, do so because they consider it generates gases and swells the stomach, without too much advice from any specialist. In this case,  we bring you a simple and easy recipe, stuffed potato.   Obviously the filling may vary according to the taste of each one, but there are certain elements that are indispensable, due to the amalgam of flavors they generate in our mouth.

Potatoes are the great salvation of thousands of people in the kitchen.  They can be accompanied in a thousand ways, fry, boil or bake . They are usually unlaborious and very soulful recipes. But in this opportunity we bring you something that will surely interest you: it's two ways to cook stuffed potatoes and leave them spectacular to share with  family , friends or loved ones.

Stuffed with meat (for 2 people)

In a frying pan, place a stream of olive oil, add the ground meat, seasoning it with pepper and salt, while frying over low heat, stirring to evenly distribute the heat. Add the bacon cut into strips, and we cook at the same time.  Once the mixture is well cooked, we remove excess fat, which will have been transformed into a tasty juice.   Add the tablespoon of flour and stir well so that it ligates and there are no lumps, and continue to stir well. Correct  salt and pepper , add oregano, cook a few more minutes the mixture, and we already have the filling.

As for potatoes, we need to boil them with skin, but they need to be removed before they become too softened. We'll split them into two halves. With the help of a spoon we empty the halves leaving some potato and we already have them ready to fill. In a bowl, we crush the stuffing well with a fork, add the meat and mix well. Add the tomato sauce to give it an extra juice, fill the potato boats, sprinkle with cheese, and put in the oven 10 minutes, until the cheese is well gratin.

Ham and leek (for 2 people) 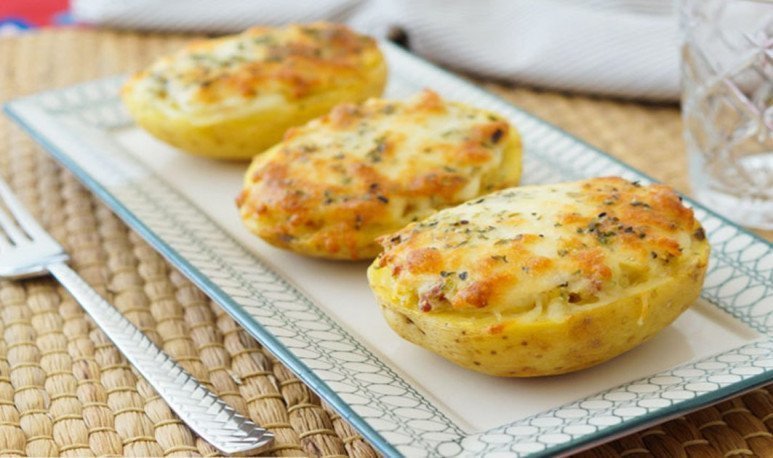 First of all, we cook potatoes in the oven, whole, in peel, wrapped in foil, on a baking sheet,  for 45 minutes or an hour, depending on their size. Either they can be boiled and finished browning in the oven, as in the previous recipe. But in case we do it directly in the oven, after the mentioned time we need to prick them with a toothpick, to know when they are at their point.   Then we let them stand and prepare the filling, removing the stem and outer layers of the leek, and cutting it into thin strips. Then, in a frying pan we pour a stream  of olive oil  and add the leek, then the serrano ham cutting the fetas into thin strips, and cook for a few minutes until the leek is golden.

Then we empty the potatoes and add that puree to the filling, mixing very well. Fill the potatoes boats, sprinkle grated cheese of the variety that we want, and leave them to bake for about 10 minutes.

Dumplings to the disk with potatoes